Hudson Yards: Another Crisis, Another Bill? 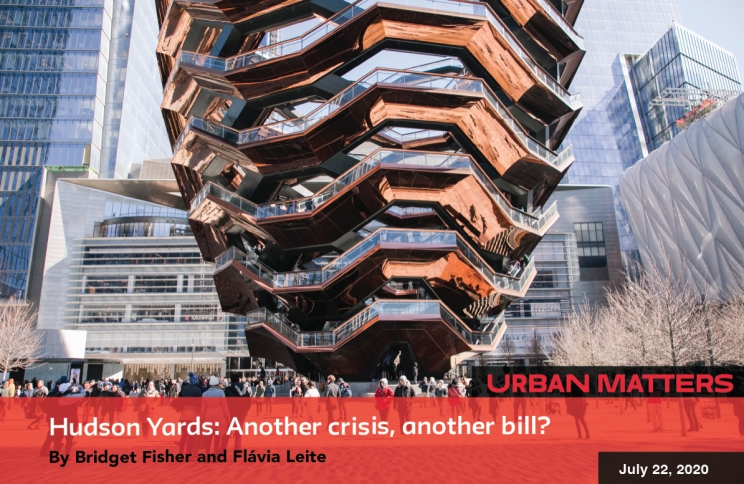 As a result of the coronavirus, New York City faces a $9 billion loss in tax revenue and hard choices to make for the city’s future. Public employee layoffs and drastic service cuts are options under discussion to balance the City budget if significant federal relief doesn’t come through. While residents wait to see what their future looks like, Hudson Yards, the city’s new luxury development on the West Side, is secure thanks to decisions made by the City 15 years ago.

The pandemic’s economic fallout has started to hit Hudson Yards, whose property taxes make up the bulk of the revenues the project relies on to pay for the City’s infrastructure investments in the area. The stalled second platform over the western rail yards is likely to be significantly delayed. The mall lost its anchor tenant Neiman Marcus to bankruptcy. And Related, Hudson Yard’s developer, reported that 75 percent of Hudson Yards’ retail tenants did not pay April rent and publicly predicted a “wave of defaults” on commercial and hotel loans. Meanwhile, the City is on the hook to start paying principal on the project’s debt come 2021. Some industry leaders and project stakeholders assure the New York Times that Hudson Yards will bounce back. In recent years the project had begun making revenue payments to City, including $350 million for the fiscal year that ended June 30.

It’s fair to say no one knows what the future will bring. And while the city’s Independent Budget Office (IBO) offers a warning that “you have to worry again” about Hudson Yards’ finances in the current recession, we can draw some lessons from how Hudson Yards weathered the Great Recession. The short answer – taxpayer support.

At the project’s beginning in 2005, the City chose to take on all the risk if and when anything went wrong in Hudson Yards. It did so first by choosing a non-traditional route to fund its investment in Hudson Yards. The City committed $3.5 billion to extend the nº 7 subway line and build the city’s most expensive office park as part of the Hudson Yards project. Rather than use the City’s capital budget, the normal practice to pay for infrastructure projects, the Bloomberg Administration and the City Council chose to finance Hudson Yards’ expenses through a complex version of Tax Increment Financing (TIF), a tool used to finance economic development projects.

Using TIF allowed the City to call the project “self-financing.” In theory, TIF debt sold for an economic development project is paid back by the revenues resulting from the development itself. In practice, if anything goes wrong, city taxpayers often end up footing the bill. In Hudson Yards, City officials chose to pledge the City’s general fund as a backstop if property taxes from the ensuing private development in Hudson Yards was ever insufficient to pay back the debt issued to build the infrastructure. In 2007, when bonds were first sold on behalf of Hudson Yards, the bond statement warned against certain factors, such as a recession risk, that could affect the project’s revenues and its ability to pay debt service. One year after the Great Recession, construction ground to a halt in New York City and delayed expected property tax revenue. The revenue shortfall cost the City $359 million in debt support, an amount 40 times greater than projected. Up until 2015, the Hudson Yards redevelopment project was not capable of funding its infrastructure investment and paying its bondholders without the City’s support.

The City also failed to build in mechanisms to protect taxpayers from standard cost overruns and spillovers that come with large, multi-faceted development projects. Over the project’s 15 year history, the City has, with little public attention, used its expense and capital budgets to cover more than $400 million in cost overruns for the subway and ancillary infrastructure costs as well as cost spillovers that come from additions to the project over time, such as $75 million for the Culture Shed.

Meanwhile, the City took proactive steps to incur other costs by including tax breaks for private developers. While asserting that commercial development in Hudson Yards was “necessary to meet projected office demand,” the City simultaneously argued that market forces alone were not sufficient to spur private development of the district and that tax breaks were necessary to ensure commercial development. Yet studies show tax incentives are an inefficient means of promoting economic development (Bartik, 2018; Florida, 2017; Fisher et al, 2012). Property tax incentives for Hudson Yards total $1.4 billion in foregone revenue for the City.

These choices 15 years ago leave city taxpayers on the hook should the depth and length of the Covid-19 recession once again leave Hudson Yards unable to pay its own bills. If that happens, significant revenue shortfalls will again trigger the City’s promise to pay interest on the debt or risk a bond default and a downgrade of the City’s credit rating. If the crisis should have long-term effects on the project’s financing, the city is also unlikely to let the project fail, even if it needs additional infusions of taxpayer cash for unforseeen costs and spillovers, a real possibility given the project is only half completed.

The financing structure used for the City’s investment comes with a final twist. Hudson Yards has first claim on precious tax dollars from the area’s new commercial property tax revenue. These revenues are diverted from the City’s general fund to a separate authority, the Hudson Yards Infrastructure Corporation. The process is known as “ring fencing,” and it means these funds are protected from competition from other priorities faced by the City. So even in times of economic crisis – like now – that result in budget cuts to essential public services such as health care or schools, Hudson Yards’ commercial property taxes will go first to supporting the city’s most expensive neighborhood, a so-called “billionaire’s fantasy city.”

Because the City chose to take on all the risk in the redevelopment project, we are all left vulnerable now that the city's economy and commercial office sector are in crisis. The lesson here is clear. Due to its financial structure rather than its merits, Hudson Yards will always be the City’s funding priority.

Bridget Fisher is the associate director of the Schwartz Center for Economic Policy Analysis (SCEPA) housed in The New School's economics department. Flávia Leite is a SCEPA research associate.

Hudson Yards: $1B in Commercial Subsidies