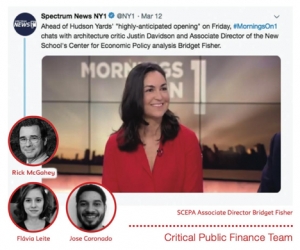 The project released timely and impactful research on the cost of New York City's Hudson Yards, a project promised to be "self-financing" which ended up costing the city $2.2 billion in debt costs, cost overruns & spillovers, and tax breaks. These findings received attention from media including The Guardian, CityLab, and The New York Times, among others.

As a result of SCEPA’s work on tax breaks involved in Hudson Yards, SCEPA’s team was invited to partner with the New York City Council Finance Division to use a model developed by Tim Bartik of the W.E. Upjohn Institute to measure the equity effects of using tax breaks to incentivize economic development in New York. In April of 2019, initial work on the research was presented at the Federal Reserve Bank of New York’s fiscal policy series.

TIF’s self-financing rhetoric can be used to shift risk onto taxpayers.