The Future of  Heterodox  Economics 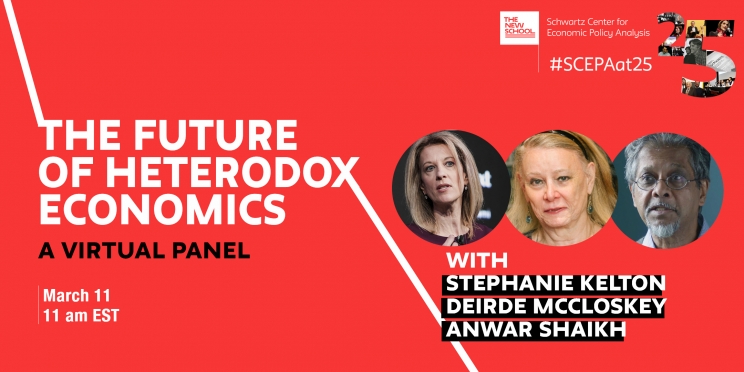 To celebrate our 25th Anniversary, SCEPA was proud to host a discussion of how heterodox economics can build an alternative framework and policy agenda for shared prosperity, greater social equality, and a sustainable planet, while avoiding past errors.

As The New School’s Schwartz Center for Economic Policy Research (SCEPA) celebrates its 25th year, SCEPA hosted top heterodox economists for a discussion on where we can find hope for providing an alternative to neoclassical mainstream economics, both in the academy and in policy on March 11th, 2021.

Read the working paper that inspired the talk here.

In the midst of the pandemic recession and the economic devastation it has wrought from families to cities, policy makers have turned to economists for solutions. But mainstream economics failed to identify the warning signs of the financial crisis of 2007-2008 and the subsequent Great Recession. And it has yet to offer an equitable solution to the ongoing recession. In fact, the dominance of the current paradigm in the education and practice of economics over the last 40 years has coincided with a historic rise in inequality and stagnant wages and ongoing racial injustice and climate change.

Clearly mainstream economics is not equipped to generate more just and secure economic outcomes. But in spite of its failure, little has changed in the way economists think about markets and states or how economics is taught in the majority of academic institutions.

Alternatives exist in the teaching and practice of “heterodox” economics -- a diverse set of schools of thought including feminist economics, post-Keynesianism, and neo-Marxism built on insights from economist such as Marx, Keynes, Robinson, and Sen.  Yet, these traditions have been sidelined in most university economics departments and often receive little attention from policy makers.

Stephanie Kelton is an economist, academic, and author of The Deficit Myth: Modern Monetary Theory and the Birth of the People's Economy. She is currently a SCEPA Senior Fellow and a Professor at Stony Brook University. Professor Kelton has served as Chief Economist on the U.S. Senate Budget Committee (Democratic staff) and as an advisor to Bernie Sanders' 2016 presidential campaign. She is founder and editor-in-chief of the blog New Economic Perspectives and she was named one of Politico's 50 "thinkers, doers and visionaries transforming American politics in 2016." She has been a notable proponent of and researcher in Modern Monetary Theory, publishing several papers and editing books in the field, and a supporter of the proposal for a Job Guarantee.

Deirdre Nansen McCloskey is Distinguished Professor Emerita of Economics and of History, and Professor Emerita of English and of Communication, at the University of Illinois at Chicago. Trained at Harvard in the 1960s as an economist, she has written twenty books and some four hundred academic articles on economic theory, economic history, philosophy, rhetoric, statistical theory, feminism, ethics, and law. She taught for twelve years at the University of Chicago in the Economics Department, but now describes herself as a “literary, quantitative, postmodern, free-market, progressive-Episcopalian, ex-Marxist, Midwestern woman from Boston who was once a man. Not ‘conservative’! I’m a Christian classical liberal.”

Anwar Shaikh is Professor of Economics at the New School for Social Research and Senior Scholar and member of the Macro Modeling Team at the Levy Economics Institute of Bard College. He has written in a variety of areas, including international trade, finance theory, political economy, U.S. macroeconomic policy, growth theory, inflation theory, and crisis theory. He is the author of Capitalism: Competition, Conflict, Crises. He is also an Associate Editor of the Cambridge Journal of Economics. Shaikh earned his PhD from Columbia University in 1973 and has been teaching at the New School since 1972.

The speakers' remarks were followed by thoughts from a PhD student in the Department of Economics at the New School for Social Research, Gustavo Pereira Serra. See his full comments here. The event also asked attendees to vote on whether or not the term 'heterodox' should be abandoned. We are excited to share the results of that poll here. 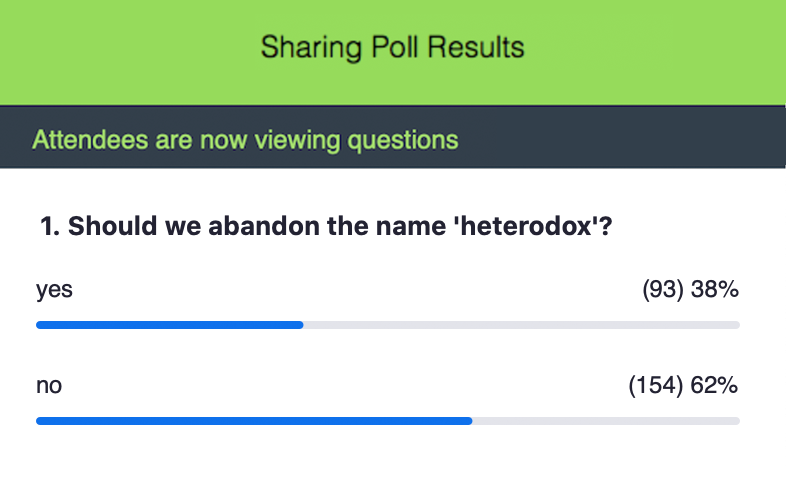