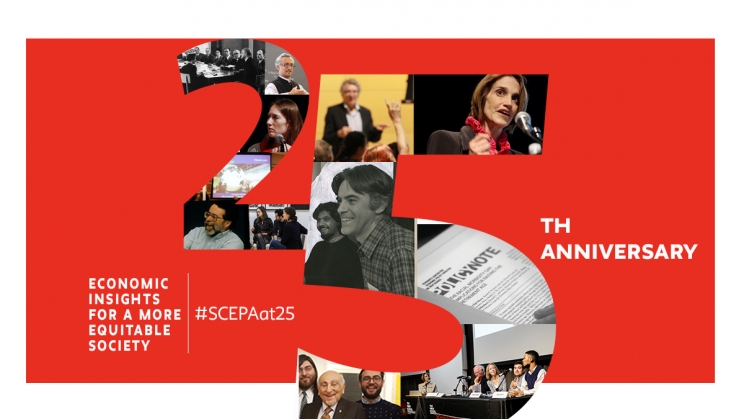 The New School's Schwartz Center for Economic Policy Analysis (SCEPA) is thrilled to commemorate its 25th anniversary. Since its inception, SCEPA has been a leader in providing progressive economic research that challenges the mainstream economic doctrines that created economic inequities and insecurities. Each day for the next 25 days, from March 1st to March 25th, The Schwartz Center will celebrate its history, team members, and supporters — past and present— and the impact of SCEPA's research both in academia and in public policy.

“We’re dedicated to producing economic research and insights that move us toward a more just and sustainable society,” said Teresa Ghilarducci, economist and director of SCEPA, on the mission of the Center. "As we think about the next 25 years, SCEPA is excited to build on its legacy and body of work to confront the challenges of economic, racial and climate inequality which are so urgent today amid the pandemic, retirement crisis, and climate crisis."

Over each of the next 25 days, the Schwartz Center will share highlights of its history, current work, and future plans via a digital outreach campaign curated on a new microsite on SCEPA's webpage. Anniversary materials include a video series released over the campaign's duration interviewing our many stakeholders over the years, a timeline of the organization's history at The New School, and a social media campaign under the hashtag #SCEPAat25 that features the economists, leaders, and researchers who impacted SCEPA, the economics profession, and public policy. We invite you to follow along with us or share your own SCEPA memories.
The campaign will also gather progressive economists to discuss the future of their community on March 11th at 11:00am ET at a virtual event titled, "The Future of Heterodox Economics.” Top heterodox economists will discuss how to provide an alternative to neoclassical mainstream economics, both in the academy and in policy. Speakers include Stephanie Kelton, economics professor at Stony Brook University and New York Times bestselling author of The Deficit Myth; Deirdre McCloskey, economics professor at University of Illinois at Chicago and author of Why Liberalism Works; and Anwar Shaikh, economics professor at The New School for Social Research and author of Capitalism: Competition, Conflict, Crises. Click here for more information and to register for the event.
Background on SCEPA's 25 Years

SCEPA was created to help build a more equitable future by sharing the academic research of the New School for Social Research (NSSR) Economics Department with policy makers, advocates, and scholars. The department and its faculty have been on the forefront of radical progressive thinking and academic research since its inception over 100 years ago. It continues today to be a home for faculty and scholars committed to questioning the status quo and reimagining the future.
SCEPA has continued this tradition for 25 years by bringing economic reality to conventional economics and challenging economic doctrines that created economic inequities and insecurities for families, for economies, and for the climate.
CEPA, the organization’s original name, was founded in 1995 by New School economist David Gordon, along with other founding members including Professor John Eatwell of Cambridge University, NSSR Dean William Millberg, and William Janeway, a Cambridge PhD and businessman. In 1996, Lance Taylor joined CEPA as Director and continued encouraging critical perspectives of mainstream economics.
CEPA went on to hold numerous events and publish research which fostered alternative economic thinking in the following years. Graduate students at NSSR became an important part of SCEPA’s work and function -- to provide burgeoning economic thinkers with a springboard to create meaningful research and affect policy.
In 2008, CEPA became SCEPA in honor of crucial support from philanthropist and businessman Bernard Schwartz, and Teresa Ghilarducci joined the organization soon after. “We really understood we were out for something more -- a more equitable, thriving economy,” says Director Teresa Ghilarducci in the first video of the anniversary series celebrating the organization's history. "Today, we connect our faculty and students to the public and policy and offer our expertise in “real life” economics - taking into account human experience - to create a road map toward a more sustainable future."
Tags:

A Green Recovery from the Pandemic Meltdown