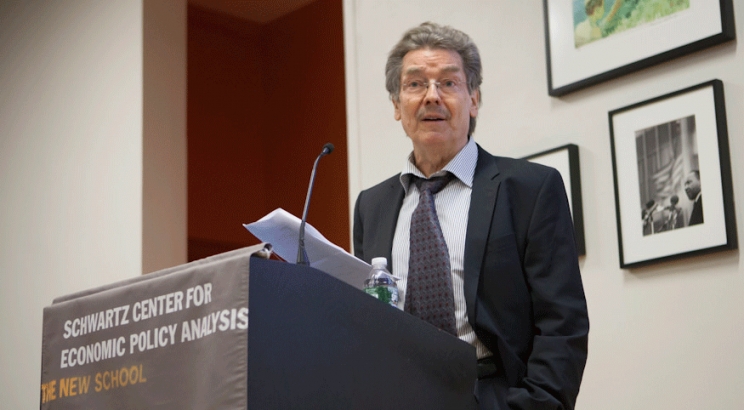 Teresa Ghilarducci is the Director of the Schwartz Center for Economic Policy Analysis (SCEPA) at The New School. She joined The New School after 25 years as a professor of economics at the University of Notre Dame and 10 years as director of the Higgins Labor Research Center at the university. She has written and lectured extensively on pension issues, including the award winning book Labor's Capital: The Economics and Politics of Employer Pensions, and she co-authored Portable Pension Plans for Casual Labor Markets in 1995. Dr. Ghilarducci’s book, When I'm 64: The Plot Against Pensions and the Plan to Save Them, investigates the effect of pension losses on older Americans. She frequently publishes in refereed journals and testifies before the U.S. Congress. She serves as a public trustee for the Health Care VEBAs for UAW Retirees of General Motors and for the USW retirees for Goodyear. She served on the Pension Benefit Guaranty Corporation's Advisory Board from 1996 to 2001and on the Board of Trustees of the State of Indiana Public Employees' Retirement Fund from 1996 to 2002.

Mark Setterfield is Professor of Economics in the Department of Economics at The New School for Social Research, and is also a member of faculty at Eugene Lang College. He was previously Maloney Family Distinguished Professor of Economics in the Department of Economics at Trinity College, Hartford, Connecticut, and has held visiting positions at the University of Masschusetts, Lowell, CEPREMAP (Paris, France), Downing College (Cambridge, UK), Dalhousie University (Halifax, Canada), l'Université de Paris XIII, Sorbonne Paris Cité (Paris, France), the University of Sao Paulo (Sao Paulo, Brazil) and the Ruhr-Universität Bochum (Bochum, Germany). He is an Associate Member of the Cambridge Centre for Economic and Public Policy at Cambridge University, UK, a Senior Research Associate at the International Economic Policy Institute, Laurentian University, Canada, a Member of the Centre d’Économie de l’Université Paris Nord (CEPN) at l'Université Sorbonne Paris Nord, France, and a Fellow of the Forum for Macroeconomics and Macroeconomic Policies (FMM) at the Macroeconomic Policy Institute (IMK) of the Hans-Böckler Foundation, Germany.

Ying Chen joined the New School in the fall of 2016 as an Assistant Professor of Economics. She holds a Ph.D. Economics from University of Massachusetts Amherst, an M.A. Social Sciences from the University of Chicago, and a B.A. Economics from Shanghai International Studies University. Her research topics include the employment impact from building green economy, living wage in the Chinese labor market setting; and the macroeconomics of economic crises. Her current research focuses on the sustainable development in contemporary China from the perspective of social, economic and environmental sustainability.

Paulo Dos Santos is an Assistant Professor of Economics at the New School for Social Research. He graduated from University College Maryland with a B.A. in Economics and B.S. in Mathematics, completed an MSc in Economics from the London School of Economics, and received a Ph.D. in Economics from the University of London. His research program involves classical political economy, banking and monetary theory, and the role of finance in economic development. His current work inquires into the social and macroeconomic content of contemporary financial practices and relations. He has recently published work on Tobin's q, the 'wage-led' versus 'profit-led' debate, and the circuit of capital, in journals including Economic Letters, the Journal of Post-Keynesian Economics, Metroeconomica, and the International Review of Applied Economics.

Duncan K. Foley graduated from Swarthmore College with a B.A. in Mathematics in 1964, and received a Ph.D. in Economics from Yale University in 1966. He has taught at M.I.T., Stanford, Barnard College of Columbia University, and since 1999 has been Leo Model Professor at the Economics Department of the New School for Social Research. He is an External Professor at the Santa Fe Institute.

He has published in the fields of public finance, macroeconomics, money, marxist economic theory, economic dynamics, neo-ricardian economics, growth theory, and complex systems theory and economics. Foley's recent work includes studies of the relation of statistical mechanics and thermodynamics to economics, global warming policy, complexity theory and classical political economy (Unholy Trinity: Labor, Capital and Land in the New Economy, Routledge, 2003), work on the foundations of statistical method, and Marx's theory of money. He published a book on the history of political economy and economics, Adam's Fallacy: A Guide to Economic Theology, in 2006.

David Howell is professor at Milano The New School for Management and Urban Policy, where he chaired the Urban Policy Program from 1994 to 2001. His research focuses on labor markets at the local, national, and international levels. Recent publications have examined the effects of immigration on the economic status of foreign and native-born workers in New York City; the nature of recent changes in skill requirements and the determinants of relative wage trends in the U.S.; and the extent to which labor market institutions and social policy explain patterns of unemployment in Europe and the United States.

Clara Mattei is an Assistant Professor of Economics at the New School for Social Research. She holds a PhD jointly from the Sant'Anna School of Advanced Studies (SSSUP) in Pisa, Italy, and Université de Strasbourg, Ecole Doctorale Augustine Cournot in Strasbourg, France, an MA in Philosophy from Pavia, and a BA in Philosophy from Cambridge University. Her research explores a comparative view of post-World War I monetary and fiscal policies and she brings broad interdisciplinary engagements to her work in the history of economic thought and methodology.

Will Milberg is Dean of The New School for Social Research and a Professor of Economics. His research focuses on the implications of changes in international trade and investment flows for employment and income distribution. He has worked as a consultant to the UNDP, UNCTAD, and ILO. He is the co-author (with Robert Heilbroner) of The Crisis of Vision in Modern Economic Thought and The Making of Economic Society. He received his PhD in economics from Rutgers University in 1987.

Willi Semmler is Professor of Economics at the New School for Social Research and is on the Board of Directors at the Center for Empirical Macroeconomics at Bielefeld University in Germany. He studied economics, mathematics, and social sciences at the Universities of Hamburg, Munich, and the Free University of Berlin and holds a PhD from the Free University of Berlin. He became Associate Professor in 1987 and Professor in 1993 at the New School for Social Research. He has been a Visiting Professor of Columbia University and Stanford University and the CEPREMAP in Paris and lectured at UNAM in Mexico City, University of Orléans, and at numerous French, Japanese, Italian, and German universities. He frequently teaches in a network of European doctorate programs and at the BIGSEM Bielefeld.

Anwar Shaikh is Professor of Economics at the New School for Social Research and Senior Scholar and member of the Macro Modeling Team at the Levy Economics Institute of Bard College. He has written in a variety of areas, including international trade, finance theory, political economy, U.S. macroeconomic policy, growth theory, inflation theory, and crisis theory. With E.A. Tonak, he is the author of Measuring the Wealth of Nations: The Political Economy of National Accounts, Cambridge University Press, 1994. He is also an Associate Editor of the Cambridge Journal of Economics. Shaikh earned his PhD from Columbia University in 1973 and has been teaching at the New School since 1972.

Lance Taylor is the Emeritus Professor of Economics at the New School for Social Research and the former Arnhold Professor of International Cooperation and Development. He received a PhD in economics from Harvard University in 1968. He has been a Professor in the economics departments of Harvard and the Massachusetts Institute of Technology, as well as a Visiting Professor at the University of Minnesota, the Universidade da Brasilia, Delhi University, and the Stockholm School of Economics. He moved to the New School for Social Research in '93. Taylor has published widely in the areas of macroeconomics, development economics and economic theory. He has served as a visiting scholar or policy advisor in over 25 countries, including Chile, Brazil, Mexico, Nicaragua, Cuba, Russia, Egypt, Tanzania, Zimbabwe, South Africa, Pakistan, India, and Thailand.

Heather Boushey is the Executive Director and Chief Economist at the Washington Center for Equitable Growth and co-editor of a volume of 22 essays about how to integrate inequality into economic thinking, After Piketty: The Agenda for Economics and Inequality. Her research focuses on economic inequality and public policy, specifically employment, social policy, and family economic well-being and her latest book is Finding Time: The Economics of Work-Life Conflict from Harvard University Press. She previously served as Chief Economist for Hillary Clinton’s transition team, and as an Economist for the Center for American Progress, the Joint Economic Committee of the U.S. Congress, the Center for Economic and Policy Research, and the Economic Policy Institute. She sits on the board of the Opportunity Institute and is an Associate Editor of Feminist Economics. She received her doctorate in economics from The New School for Social Research and her bachelor’s from Hampshire College.

Darrick Hamilton, co-author of Beyond Broke: Why Closing the Racial Wealth Gap is a Priority for National Economic Security, is Executive Director of the Kirwan Institute for the Study of Race and Ethnicity and Professor at the Ohio State University John Glenn College of Public Affairs. Professor Hamilton is a stratification economist, whose work focuses on the causes, consequences and remedies of racial and ethnic inequality in economic and health outcomes, which includes an examination of the intersection of identity, racism, colorism, and socioeconomic outcomes. He has authored numerous scholarly articles on socioeconomic stratification in education, marriage, wealth, homeownership, health (including mental health), and labor market outcomes.

William M. Rodgers III is Professor of Public Policy and chief economist at the Heldrich Center for Workforce Development at Rutgers University. He is a member of the graduate faculty of Rutgers’ School of Management and Labor Relations, and a senior research affiliate of the National Poverty Center, University of Michigan. From November 2009 to January 2010, Rodgers served on President Obama’s Department of Labor Transition Team. Prior to Rutgers, Rodgers served as chief economist at the U.S. Department of Labor from 2000-2001. Professor Rodgers’ research examines issues in labor economics and the economics of social problems. Professor Rodgers’ most recent book, The Handbook on the Economics of Discrimination, published by Edgar Elgar was selected by Choice, the review journal of the American Library Association, as an “Outstanding Academic Book for 2006.”

Rick McGahey is a nationally recognized expert on urban and regional economic development, program evaluation, retirement policy, and workforce development. At the Ford Foundation, McGahey was the Director of Impact Assessment, developing and implementing assessments to help the Foundation achieve greater impact, and also was a Program Officer focusing on economic and workforce development emphasizing equity and community development for economic, social, and environmental goals. During President Clinton’s second term, he served as Assistant Secretary for Policy, and later for Pension and Welfare Benefits, at the U.S. Department of Labor under Secretary Alexis Herman. He has a Ph.D. in economics from the New School for Social Research and has taught at The New School, New York University, John Jay College, and the George Washington University.

Lauren Schmitz is an Assistant Professor at the University of Wisconsin’s School of Public Affairs. Her research utilizes genomic and epigenomic data from population-based longitudinal studies to examine how inequalities in the social environment get underneath the skin and shape disparities in health and socioeconomic attainment. In 2017, she received a K99/R00 Pathway to Independence Award from the National Institute on Aging (NIA). Her research has also been supported by the National Science Foundation, the Social Security Administration, the Russell Sage Foundation, and the March of Dimes. She earned her Ph.D. in Economics from the New School for Social Research and recently received an M.S. in Human Genetics from the University of Michigan.