The stratification economics framework may best clarify the causes of racial health disparities and help to develop policy solutions.

This article, "Changing Our Frameworks Can Help Parse Racial Disparities In Stress-Related Morbidity," originally appeared in the Fall 2019 Volume of “Generations,” a journal of the American Society on Ageing, or ASA. Copyright © 2019 American Society on Aging; all rights reserved. This article may not be duplicated, reprinted or distributed in any form without written permission from the publisher: American Society on Aging, 575 Market St., Suite 2100, San Francisco, CA 94105-2869; e-mail: This email address is being protected from spambots. You need JavaScript enabled to view it.. For information about ASA’s publications visit www.asaging.org/publications. For information about ASA membership visit www.asaging.org/join.

Stark racial divisions along economic and social lines have long been and continue to bedefining features of American life. Health disparities across racial groups are considered downstream consequences of these economic and social divisions. Neoclassical economics, political economy, andstratification economics provide potential explanations for health disparities. Preliminary support forthe stratification approach is provided in the research. Understanding the causes of racial healthdisparities is crucial in developing better policy solutions to those disparities.

Stark racial divisions along economic and social lines have long been and continue to be defin­ing features of American life. Health disparities across racial groups are considered downstream consequences of these economic and social divi­sions (Gehlert et al., 2008). Mortality differences between blacks and whites can largely be attrib­uted to racial differences in socioeconomic status (Bosworth, 2018). As for morbidity (the incidence of disease and disability), the relationship is a two-way street: lower socioeconomic status leads to worse health, and worse health affects a per­son’s capacity to earn income and build wealth (Smith and Kington, 1997).

There are clear racial differences in the inci­dence of chronic diseases most associated with lower income, lower wealth, and higher mortality. Blacks are more likely to experience hypertension, stroke, heart disease, obesity, and diabetes than are their white counterparts (Cunningham et al., 2017). However, even when taking differences in socioeconomic status into account, racial differ­ences remain (Thorpe et al., 2011). How to explain the remaining differences in health between blacks and whites in the United States? Three possible approaches are those given by neoclassi­cal economics, political economy, and stratifica­tion economics.

The neoclassical economics approach to health emphasizes the roles of individual behavior, preference, and inborn characteristics, such as genetics (Becker, 2007). Neoclassical health economists use a “health production function” to model the way individuals invest in their own health. In this model, individuals decide whether or not to invest in their health by balancing the costs of healthcare and healthful goods against other personal wants and needs.

The tools available to neoclassical economists lead them to explain disparities in health as the result of either poor health behaviors or inborn biological predispositions toward poor health. While behavior and genetics play important roles in determining health differences at the individual level, because race is a social category that deter­mines neither individual behavior nor genetic makeup, they are of limited use in explaining racial health disparities (Silverstein, 2015).

Political economy provides one alternative to the neoclassical approach by instead focusing on the effects of the political and economic environments on population-level health trends.

Historically, the most significant reductions in mortality and morbidity in the United States have happened as a result of politically deter­mined, hard-won improvements in economic and living conditions for masses of people—from public sanitation, to labor laws, to environmen­tal regulation (Chernomas and Hudson, 2013). Today, gains in life expectancy disproportion­ately go to those at the higher ends of the wealth, income, and educational distributions, and those at the bottom disproportionately face disease burden (Sanzenbacher et al., 2017).

The political economy approach grapples with the ways capitalism shapes people’s life chances differently based upon how they earn their living, and with the ways large groups of people—not just individuals—are barred from reaching their health potential through a lack of economic resources. As a framework for explain­ing racial disparities in health, political economy is an improvement over neoclassical economics, as it says that the stark economic disparities between blacks and whites in the United States account for a significant portion of health dispar­ities between those two groups. However, because racial disparities in health remain, even after accounting for differences in wealth and income, further investigation is required to reach an adequate explanation of racial gaps in health.

Stratification economics provides another alter­native approach to explaining racial health dis­parities. Stratification is the process by which dominant groups in society create laws, shape institutions, and enforce policies and norms such that those groups maintain and improve their position relative to the disadvantaged. The United States is marked by a history of racial stratification, in which non-white racial groups have been consistently disadvantaged relative to their white counterparts. Stratification eco­nomics combines economic tools with those of sociology and social psychology to understand the causes and consequences of group-based stratification (Darity et al., 2017). A stratification approach to health disparities focuses on the historic social and political circumstances that have led to disparity—the institutions, laws, and norms that stratify society and allow disparities to perpetuate, and-or the material conditions that are the basis for disparity (not unlike the political economy approach).

Scholars in social psychology, epidemiology, and sociology investigate the role that stress, induced by exposure to racial oppression, stigma, and discrimination, plays in shaping health dis­parities (Williams and Mohammed, 2009). Con­stant activation of the systems that the human body uses to mitigate stressful situations causes several morbidities (collectively referred to as “allostatic load”), including hypertension and inflammation (Howard and Sparks, 2016).

Colen and colleague’s (2018) research inves­tigates the role exposure to “everyday discrimi­nation” plays in worsening physical and mental health among black Americans; alongside this, similar research by Sturgeon et al. (2016) investigates the same health consequences for exposure to finan­cial strain. Stress can be defined as the circumstance wherein an individ­ual appraises their available resources as inadequate for meeting a situation’s demands (Brondolo et al., 2017). 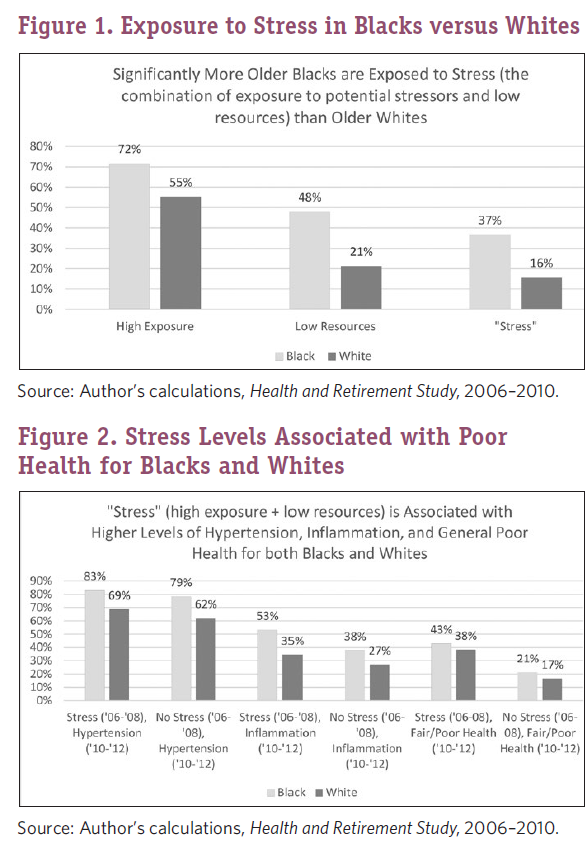 An investigation of racial health dispar­ities from the stratification economics perspective, using a sample of working, non-Hispanic black and white respon­dents ages 50 to 64 from the Health and Retirement Study (between 2006 and 2010), showed the following:

√ Blacks are more likely to expe­rience both high exposure to poten­tial stressors (everyday discrimination and financial strain) and low economic resources (wealth and income); and

√ This combination (i.e., “stress”) is associated with higher rates of hyper­tension or inflammation.

While further research is required to establish causal relationships, the work thus far points to the importance of considering both economic resources and exposure to potential stressors in explaining racial health disparities. The stratifi­cation economics approach can guide us toward better theories for explaining the stark group-based economic and social disparities that char­acterize the United States.

It also should guide us toward policies that target the laws, institutions, and norms that maintain disparity, rather than the individuals most disadvantaged by stratification. One exam­ple of such a policy could be a federal jobs guar­antee, which could help to circumvent racial discrimination in the labor market (Paul, 2018). The current understanding of the causes of racial health disparities must be reoriented in order to move forward on developing better solutions to address these disparities.

Kyle K. Moore, a senior policy analyst with the United States Joint Economic Committee (Democrats) in Washington, D.C., is pursuing a doctorate in Economics at The New School for Social Research, in New York City.