Brief — May 2015 Unemployment Report for Workers Over 55

This week another GOP presidential hopeful, Jeb Bush, announced his support for raising the retirement age, a policy that would force older workers with inadequate retirement savings to depend on the labor market for needed income and savings. Yet, today's federal jobs report announced a May unemployment rate of 3.7% for older workers over 55 and nearing retirement. This is a decrease of 0.3 percentage points since last month, but it still means that 1.5 million older workers want to work but can't find a job.

This situation is particularly dire for older women. Given women's longer life expectancy, they will need to sock away retirement savings for five more years than men. According to the Census Bureau's Survey of Income Program and Participation (SIPP), over half of older women ages 50-64 have nothing saved for retirement. For women of the same ages who do have retirement savings, their median retirement account balance is $40,000.

As we've seen, the labor market is no panacea for the retirement crisis. Older women have an unemployment rate of 3.6% in May, which means 715,000 women over 55 cannot find a job. Meanwhile, more older women are in the labor market. Since the 1980's, older women workers have increased by 171%, from 15 million to 40.5 million. The gender wage gap is also persistent, following women from college graduation through the pre-retirement years. In 2013, older women made between $0.73 and $0.80 for every dollar made by men of their own age. 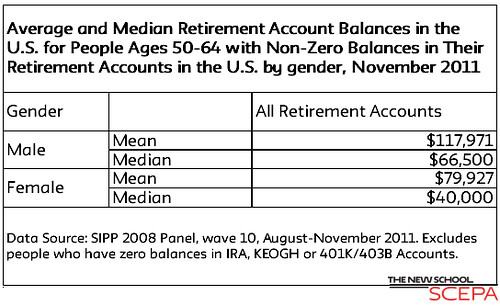 For an older woman facing her last years to save, trying to work and save in this labor market means it will take her longer and she will get less.

Raising the retirement age is not a solution, for women or for men. Rather, we need to reform the failing pension institutions that got us here by creating Guaranteed Retirement Accounts (GRAs) on top of Social Security to provide guaranteed income to seniors for life. By allowing people a viable path to saving, we can allow all workers the choice to continue working or to leave the labor market when it doesn't treat them well.