“If Republicans succeed in rolling back DOL regulations, they will destroy the best chance 63 million American workers have of getting access to a retirement plan,” said Teresa Ghilarducci, director of the Retirement Equity Lab (ReLab) at The New School. “These states took the responsible first step to save their residents from a retirement crisis defined by low coverage and inadequate savings and protect their taxpayers from the fiscal crisis resulting from millions of indigent elderly. This would be a painful step backwards for the millions who are shut out from the dwindling number of employer-sponsored plans.” 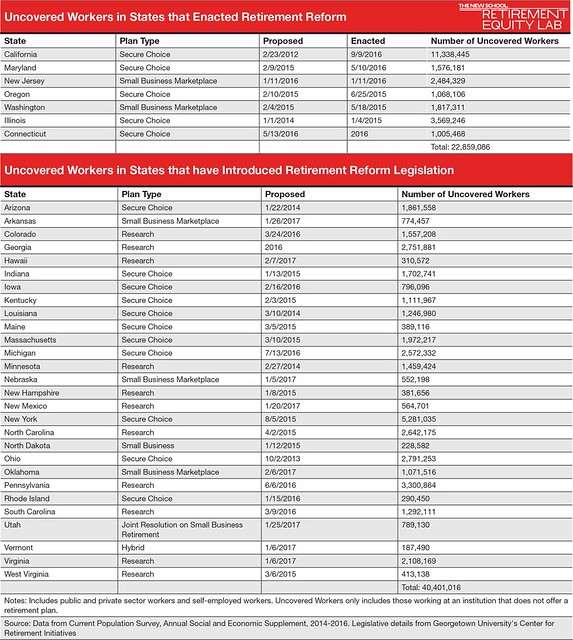 According to ReLab’s calculations using the U.S. Census Bureau’s Community Population Survey, of the 161 million workers in the United States, over half - 54.2% or 87 million workers - do not have access to a retirement plan at work.

The U.S. House of Representatives voted today on a Republican-sponsored Congressional Review Act resolution to overturn the Department of Labor’s final rule, “Savings Arrangements Established by States for Non-Governmental Employees,” that provides legal support to city and states who have either enacted or are considering plans to provide retirement accounts to private sector employees who are not offered a plan through their employer. The regulations clarify and define the ability of states and certain cities to enact plans in coordination with the federal law known as ERISA (the Employee Retirement Income Security Act of 1974). ERISA provides federal protections for workers participating in most retirement and pension plans sponsored by private employers. Without this support, state plans will be left with legal uncertainties that could prevent implementation or enactment of state-administered IRA accounts for uncovered private workers.

“Evidence has shown again and again that access to employer-sponsored plans is the linchpin of retirement security. Without workplace plans, people simply don’t save enough to support themselves in retirement,” said Ghilarducci. “The breathtaking pace of state efforts to increase coverage reflects the political will to address a need that is not being met in the private market. Few workers without access to an employer-sponsored plan invest in an IRA, many of which come with high fees. In contrast, state plans will default uncovered workers into low-cost, state-administered IRAs.”

Since 2011, 35 states have proposed or enacted retirement reform to provide private sector workers access to retirement savings accounts. State plans, also known as Secure Choice Plans or SCPs, are state-level retirement plans designed to provide retirement savings accounts to private sector workers who do not have access to such a plan at work. Under SCPs, designated private-sector employers are required to automatically deduct a percentage of their workers’ pay and forward it to state-sponsored individual retirement accounts (IRAs). Accounts are individually owned and professionally managed administered by independent boards headed by state-appointed trustees. Under these plans, employees would have the right to change their contribution rates or opt out of making contributions.