The Growth of Unstable and Low-Wage Work among Older Workers

This report documents the growth in older workers’ unstable and low-wage jobs from 2005 to 2015.

By 2015, nearly 25% of older workers were in bad jobs. Bad jobs include the alternative work arrangements of on-call, temp/contract, and gig jobs (excluding independent contractors) and low-wage traditional jobs (paying less than $15,000 per year).

This report finds that: 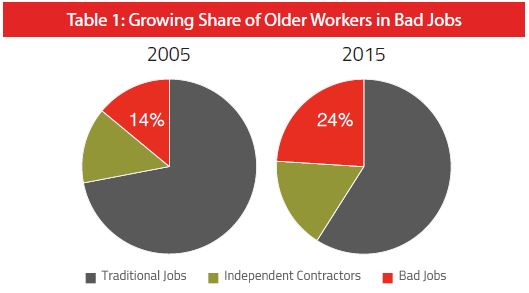 The share of older workers in alternative work arrangements (AWAs) is growing relative to the share in “traditional” jobs. Most of the growth in AWAs comes from jobs with unstable employment and low pay. The share of older workers in on-call jobs, temp/contract agency jobs, and gig jobs grew by 5 percentage points. The share in independent contract jobs, the highest paying form of alternative work, increased 3 percentage points.

Workers in on-call, temp/contract agency, and gig jobs are more likely than average to have lost their previous job involuntarily and have low tenure in their current jobs. Their median earnings are $14,000. Many older workers in alternative work jobs take on these jobs as a last resort after losing their “career jobs.” They cannot afford to retire, but also cannot find traditional work in their industry, and view their job prospects as dimmer than most.


Workers in low-paid traditional jobs have been in their current jobs for longer than those in unstable AWAs while they also face greater deprivation, with 12% reporting having faced food insecurity in the last year. These workers appear stuck in their precarious situations, with little prospects of moving into higher paying work.

Providing older workers a reliable retirement savings account, such as Guaranteed Retirement Accounts (GRAs), would do more to enhance older workers’ retirement prospects and increase workers’ bargaining power than compelling workers to take on precarious jobs. GRAs are individual savings accounts that all workers can contribute to, with employers matching contributions and the government providing a guarantee of principal. GRAs provide a safe, effective vehicle for workers to accumulate personal retirement savings over their working lives.