What is Tax Increment Financing (TIF)? 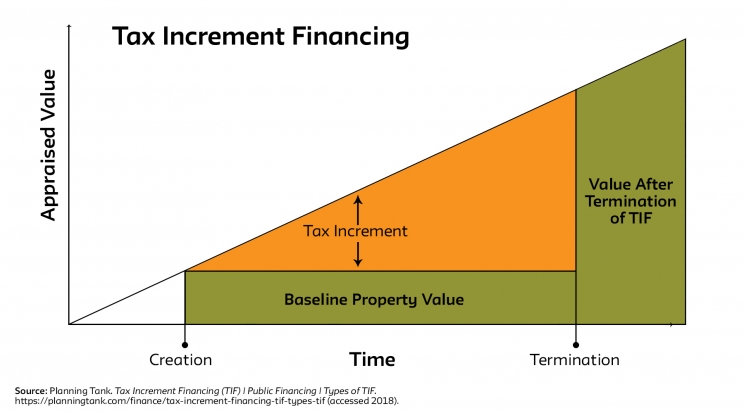 Tax increment financing (TIF) is a financial tool used by local governments to fund economic development. Though the basic concept of TIF is straightforward—to allow local governments to finance development projects with the revenue generated by the development—its implementation can differ in each state and city where it is used. The evolution of TIF from its origins in mid 20th-century urban renewal programs to its current widespread use across the United States is important for understanding the contemporary economic and social questions surrounding TIF: does TIF promote economic development? Does the use of TIF exacerbate inequality? And, does TIF fulfill its premise of being a “self-financing” tool? Today, in New York City, Hudson Yards is the largest TIF-type project in the United States, making understanding the advantages and pitfalls of TIF essential for comprehending the direction of urban development.

A Short History of TIF

TIF was born in California in 1952 as an urban renewal financing tool that allowed cities to raise matching funds for federal dollars earmarked to develop blighted and depressed city centers (Briffault 2010). TIF provided a means to raise those funds without issuing city bonds, which required voter approval. The use of TIF accelerated in the late 1970s when cuts in federal and state support for local economic development occurred alongside new laws, such as California’s 1978 Proposition 13 that limited local governments’ abilities to raise taxes without voter approval. Together, these changes pressured municipal leaders to create new financial resources without new tax burdens. By 2010, 49 states and the District of Columbia had authorized TIF (CDFA 2015). Today, it is characterized as the “most widely used local government program for financing economic development in the United States” (Briffault 2010). 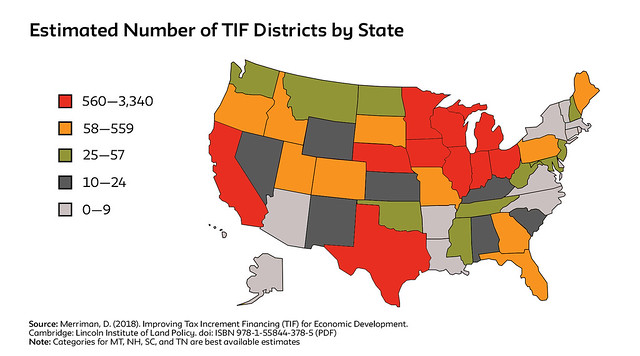 TIF is based on the theory that development can pay for itself. The basic idea is that public investment in an area, often in the form of infrastructure, induces property value growth which increases property tax revenue. The revenue increase is, in turn, used to pay for the initial investment. This results in TIF being labeled as “self-financing,” due to the use of future revenue to pay current costs.

Though operating within a legal framework established at the state level, local leaders establish the specific parameters of TIF projects, including district boundaries, goals, financing, and capital projects, among other details.1 TIF implementation generally begins with the definition of a geographic TIF district by local officials. This area’s property taxes are frozen on the tax roll. For the duration of the TIF project, this “base value” of property taxes is paid to the applicable local taxing authorities, including local and county governments, school districts, fire and park entities, and any special districts. Revenues resulting from increases in property value above the base value, the "increment," are paid to the municipality or an economic development authority operating on its behalf. While not common, TIF districts may capture other revenue streams, such as sales tax, payments in lieu of taxes (PILOTs) or fees (CDFA 2015).

Initial investment funds can be raised in a number of ways.  Often, cities will create a non-profit development agency with the power to issue bonds backed by the projected incremental revenues. Localities can also set up a “pay as you go” process using current tax revenues from the TIF district to pay for new public improvements or reimburse developer’s up-front costs. Less frequently, developers use conventional loans to fund infrastructure investments, which are later repaid by the TIF increment.

TIF can also draw on subsidies from local authorities designed to lower developer’s investment costs (Merriman 2018). In Massachusetts, TIF revenue is disbursed in the form of tax abatements, where developers pay discounted property taxes for a particular period (U.S. PIRG Education Fund 2011). In other states, such as Illinois or Michigan, land rental or sale at below fair-market value subsidize TIF projects (Merriman 2018).

Blight and “But For” Requirements

As a tool designed to stimulate economic growth in distressed communities, TIF projects were generally required by state law to meet two preconditions: addressing economic blight and fulfilling “but for” requirements.

The legal requirement that an area be designated as blighted to qualify for a TIF project is a legacy of federal urban renewal programs’ goals of targeting urban blight, characterized by substandard structures, slums or deteriorated housing.2 However, in practice, “blight” has been interpreted broadly so that TIFs are often used to finance the development of vacant, rural or underdeveloped areas (Lefcoe 2011). Because the financing model depends on future revenues, TIFs are often not used to combat urban blight but instead deployed in underdeveloped areas that show the promise of future increased property values that can repay the initial development (Anderson 1990). TIF areas have been established to finance, for example, a Wal-Mart on farmland and a golf course in a suburb.3 A 1999 study found that 45% of Wisconsin’s 661 TIFs were used to develop open space—primarily farmland.4 As Youngman (2011: p4) points out: “these areas may not be blighted or underserved by private developers, but they may offer dramatic increases in assessed value simply by being reclassified as commercial or industrial.”

“But for” laws require a TIF be used only for development that would not happen “but for” the TIF. The underlying assumption is that if this condition is met, property tax increments can be attributed to the TIF-related investment, rather than from other sources such as inflation or regional growth. To support the “but for” status of a project, sponsors complete a ‘counterfactual analysis’ to demonstrate possible property tax growth with and without the TIF-related investment. However, because project sponsors have strong incentives to show an area will remain blighted without investment and they develop their own counterfactual modeling, the “but for” analysis is reduced in many cases to a procedural hurdle. Several states have dropped the "but for" test, and it remains a prerequisite in only 18 states. Yet, even in states where the test is not legally required, project sponsors often work to establish “but for” status as protection against public criticism that taxpayer dollars were spent in an area that would have developed without public investment.

1. For more details on each state’s TIF-enabling legislation, see table 2 of Merriman, 2018 - “Number of TIF Districts and Additional Authorized Uses of TIF Revenues by State”

2. The terms usually used to characterize “blight” trace back to the creation of TIF statues in the 1970s and 1980s and point to a “Progressive-era model tenement ordinances intended to address urban slum conditions” (Le Roy, 2008)

4. “These areas may not be blighted or underserved by private developers, but they may offer dramatic increases in assessed value simply by being reclassified as commercial or industrial.” (Youngman, 2011)