The decline in older men’s wages during the strong and prolonged economic recovery signals that older workers have lost bargaining power in the labor market.

The decline in older men’s wages during the strong and prolonged economic recovery signals that older workers have lost bargaining power in the labor market.  The absence of rising wages during a time of the lowest unemployment rate since 1969 suggests that more than supply and demand forces determine wages. The wage outcomes of negotiations between a group of workers or a single individual depend on the struggle between employers’ ability to pay and workers’ ability to demand higher wages. Workers’ ability to get higher wages is determined by their relative bargaining power, which relies on their ability to walk away from inadequate employment offers. A worker who is geographically restricted or has little in the way of retirement benefits is less able to walk away.

Older workers with secure retirement income have the option to walk away from unsuitable jobs and retire. However, most older workers – at all income levels - do not have enough retirement wealth to meet target incomes.

Inadequate savings translates into downward mobility and deprivation in retirement. ReLab estimates that 8.5 million (40%) middle-class older workers and their spouses will fall into poverty or de facto poverty if they retire at age 62.

Without a decent pension as a fallback position, older people tend to accept the hours, wages, and working conditions offered to them and employers experience a large supply of inexpensive, undemanding older workers.

Insecure employment relations such as alternative work arrangements and the erosion of internal labor markets (opportunities for training and promotion from within) weaken bargaining power.

Most workers in alternative arrangements cannot bargain over the terms of their employment. Gig workers often obtain work through electronically-mediated platforms that explicitly prevent bargaining over wages.

The erosion of internal labor markets decreases the duration of employment relationships and displaced workers are more likely to job-hop, suffer involuntary job losses, and experience subsequent unemployment. Older workers have been disproportionately impacted by these shifts in workplace structure.

Growth in employer’s monopsony power (see below) and other forms of employer advantage is countered by unions and minimum wage requirements that strengthen employees’ bargaining position. However, these institutions and policies meant to protect workers have been eroded by conscious policy choices. The Economic Policy Institute documents that anti-union policies and opposition to minimum wage increases have intentionally undercut institutions and standards that previously bolstered the economic leverage and bargaining power of typical workers. Inaction and policies harming older workers include:

Geographic immobility increases workers’ exposure to monopsony power (see above). If a worker is unlikely or unwilling to move for a better job, they have fewer employment alternatives and therefore less leverage with their employer. This is a bad formula for older workers, who are more likely to live in regions with stagnant economic growth, falling home values, and stalled wages, but are less likely to move. In fact, older workers are only 17% as likely to move for a job compared to younger workers due to having established roots in their communities.

Age discrimination is prohibited by law, yet signs are everywhere that ageism thrives in the workplace. Twenty percent of employers surveyed consider an aging workforce a liability. Unconcerned about losing out on hiring skilled workers, these firms report that older workers are likely to increase costs or reduce productivity. Other studies reveal a gap between employers’ expectations of how long workers should remain in the workplace (until 64) and employees’ expectations that they should be able to work until 75. Together, this evidence suggests that more older people seek work than there are employers willing to hire them. This excess in the supply of older workers favors employers by putting added downward pressure on older workers’ wages.

6. Unintended Consequences of the EITC

The EITC negatively affects older workers in particular. Childless workers above 65 years old are ineligible for the credit, but often work side by side with EITC-recipients in low-wage jobs. The New School’s Farmand and Ghilarducci document how the EITC dampens wage growth for these ineligible older workers while the employer enjoys much of the EITC subsidies indirectly (see The American Prospect for more detail).

1. Create a Federal Older Workers Bureau:
An Older Workers Bureau at the U.S. Department of Labor would formulate standards and  policies to promote the welfare of older workers, improve their working conditions, and advance their opportunities for profitable employment.

2. Advance Older Workers' Rights
We must protect institutions and polices that support workers’ rights on the job, including support for unions and protection of the rights to labor representation and collective bargaining. However, given the low levels of union membership, minimum wage hikes are necessary to ensure living wages for older workers who are highly represented in low-paying jobs such as food service, retail, and care work.

4. Boost Retirement Security
Expanding Social Security and creating Guaranteed Retirement Accounts (GRAs) would allow all Americans access to a secure retirement. GRAs are a proposal for universal individual accounts funded by employer and employee contributions throughout a worker’s career and a refundable tax credit. With GRAs, workers can accumulate the savings they need to retire, rather than be forced into precarious, low-paying jobs. Moreover, if older workers could choose retirement over bad jobs, employers would be compelled to offer better pay, restoring the bargaining power of those choosing to extend their careers.

The headline unemployment rate (U-3) for workers ages 55 is 2.8% this quarter (from April to June), which represents a 0.1% decline from last quarter. ReLab’s U-7 figure includes everyone in headline unemployment, plus marginally attached and discouraged workers, involuntary part-time workers, and the involuntarily retired (those who say they want a job but have not looked in over a year). U-7 decreased from 6.8% to 5.7% in the last three months. The share of jobless older workers who reported spending more than 27 weeks looking for work was 38%, down from 42% last quarter. 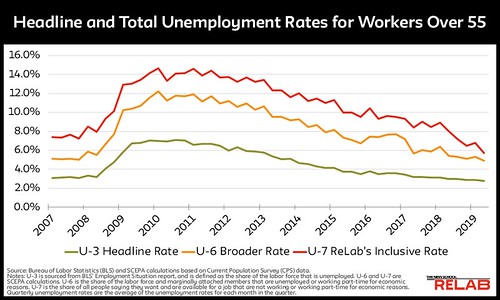 Therefore older workers who are not eligible will get lower pay, but not the supplement. Real median hourly pay (about $11 per hour) for older workers in personal care and home health ocuupations rose by 43 cents from 2009 to 2019, a strong indicator of weakened bargaining power. 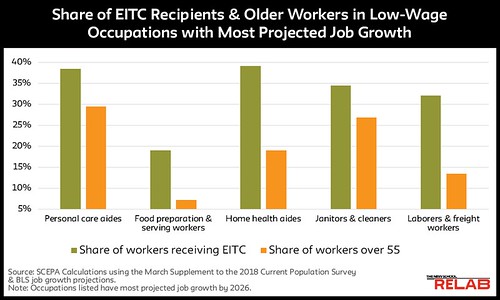 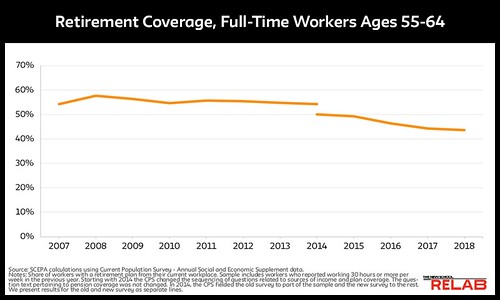 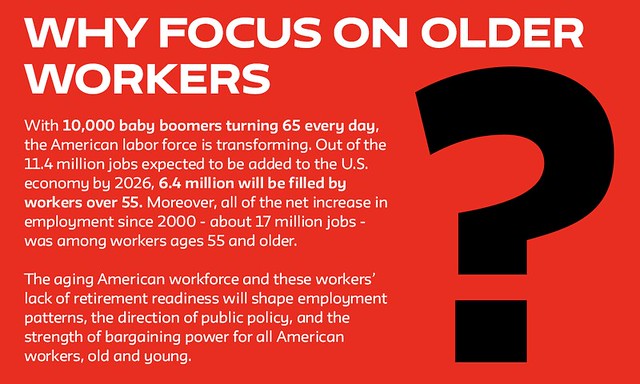