Households ages 55 to 64 at every income level are more financially fragile in 2016 than those approaching retirement in 2006, with the overall rate of financial fragility rising to 35% from 31%. (2016 is the year for which most recent data is available; see appendix for methodology.) For older workers in the lower half of the income distribution, the share of those considered financial fragile rose to 46% from 42%.

Financial fragility improved for older workers since the depths of the Great Recession in 2010, after which household debt fell. This improvement likely continued after 2016, but the trend was limited to higher-income groups. For the bottom half, too few older workers built up enough assets to pay their debts in the case of lost income, and fragility remained high.

Scars from the Last Recession

When unemployment spikes during recessions, longer job tenure protects many older workers from job loss. For older workers who lose their jobs, however, the effects are more severe than for younger workers. The time the typical unemployed older worker took to find a new job peaked at 43 weeks following the Great Recession, compared to 29 weeks for workers aged 35 to 44.

When they did find new jobs, older workers took a larger pay cut relative to younger workers. For men aged 50 to 61 who found new jobs, hourly wages were 20% lower on average. For those 62 and older, wages fell 36%. This compares to a pay cut of just 1.5% for men aged 25 to 34.

Unemployment also scars workers, since job loss during recessions is associated with depressed future earnings and higher risk of subsequent layoffs for years and even decades to come. Scarring is a risk for a significant share of workers who were between ages 45 and 54 during the Great Recession and are now nearing retirement. Between 2007 and 2009, about 13% of workers in this group—or 4.4 million workers—lost their jobs, a higher share than in any other recession since 1984. For these workers, job loss led to an average fall in subsequent earnings of at least 25%. As this same group, now in their late 50s and 60s, faces the prospect of another recession, the effects of the previous recession means they are more vulnerable to job loss and depressed income.

The past 15 years have seen a continuation of the decline in traditional pensions and the rise of less-secure 401(k)-type retirement savings plans at work. The share of older workers covered by defined-benefit (DB) pensions fell 7 percentage points between 2006 and 2016, from 27% to 20%, according to HRS data. The decline in traditional pensions was balanced out by a rise in defined-contribution (DC) plans, such as 401(k)s.

Unlike DB plans, DC plans are vulnerable to leakages that reduce economic wellbeing in retirement, particularly for those over 60. When households experience economic shocks such as job loss, divorce, or the onset of ill health, they often reach for their 401(k)-type or IRA holdings because they lack an emergency fund—especially if they have debt payments to make. About a fifth of all retirement savings withdrawals are related to such shocks, and these drawdowns are concentrated among lower-income households least able to afford sacrificing retirement wealth.

The rising share of older workers in the U.S. calls for the establishment of an Older Workers Bureau—similar to the Women’s Bureau established in 1920—to focus on older workers’ issues and devise policies to address them.

4. Ensure the Option of Quality Retirement

Older workers who lose their jobs face downward mobility. Instead of increasing the retirement age, which is equivalent to a cut in benefits, lawmakers should strengthen and expand Social Security, ensuring a reliable fallback option when working longer is not possible. Guaranteed Retirement Accounts (GRAs) would give workers access to a secure and accessible way to save for their retirement and supplement their Social Security benefits. GRAs are a proposal for universal individual accounts funded by employer and employee contributions throughout a worker’s career and a refundable tax credit.

The headline unemployment rate (U-3) for workers ages 55 and up is 2.6% this quarter (from July to September), which represents a 0.2% decline from last quarter. ReLab’s U-7 figure includes everyone in headline unemployment, plus marginally attached and discouraged workers, involuntary part-time workers, and the involuntarily retired (those who say they want a job but have not looked in over a year). U-7 decreased from 5.7% to 5.5% in the last three months. The share of jobless older workers who reported spending more than 27 weeks looking for work was 33%, down from 38% last quarter. 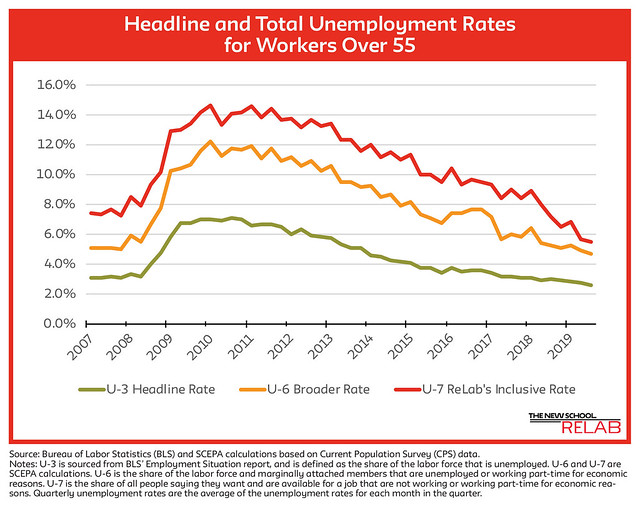 The inability of lower-paid older workers to improve their finances coincides with the stagnation of wage growth and the spread of low-wage jobs among older workers. Despite a strong jobs market, real weekly earnings for median older workers have not improved since the end of the Great Recession. To escape financial fragility, older workers need to build up assets and pay off debts. It is hard to do so when wage growth is failing to keep pace with inflation. 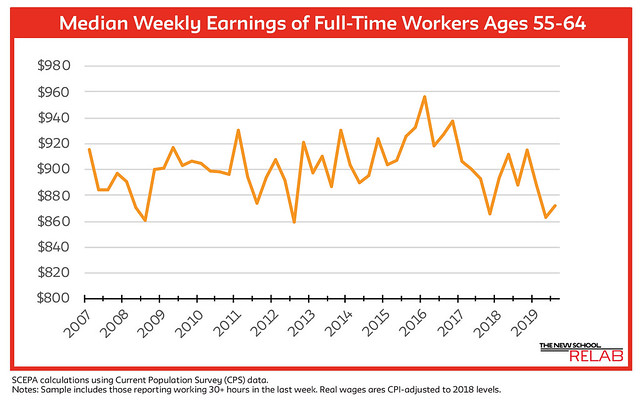 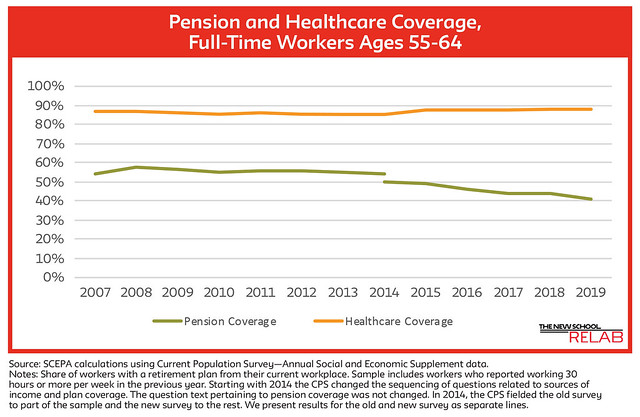 To measure financial fragility, we constructed a binary indicator using data from the nationally representative Health and Retirement Study (HRS). The indicator relies on three measures of fragility: the ratio of mortgage to home value, the ratio of non-mortgage debt to non-housing assets, and the possession of non-retirement assets in excess of three months income. If a household exceeds certain limits on either of the ratios, or falls under the asset threshold, it is deemed fragile.

The threshold for housing debt to home value ratio is 0.8, since a household whose mortgage falls below 80% of its home value can more easily sell its house in case of job loss. For the ratio of non-housing debt to other assets, the threshold is a more stringent 0.5, since this kind of debt tends to be shorter-term and have higher interest rates. The asset threshold reflects the fact that households with more than three months income are in a better position to make ends meet between jobs. Retirement funds are excluded from the asset side of the measure because we are interested in households’ ability to withstand recessions without endangering retirement prospects. For a similar methodology, see Lusardi, Mitchell and Oggero (2018).

Job loss rates are authors’ calculations using the Current Population Survey Displaced Workers Supplement, following the methodology of Farber (2015) and Farber (1998). Reasons for job loss include plant closure, layoffs and elimination of positions. Workers who lost their jobs due to seasonal job completion are not included. Only 25% of workers whose reason for job loss is listed as “other” are included in the job loss totals, again following the methodology of Farber (1998), whose examination of survey responses found that roughly a quarter of workers listed as “other” lost their jobs involuntarily.

Pension coverage is presented for workers aged 55-64 in the HRS, calculated only for those working. The DB rates include those who report having DB pensions only and those with both DB and DC plans.

Farber, H. S. (1998). Has the rate of job loss increased in the nineties? No. 394. Industrial Relations Section, Princeton University.

Farber, H. S. (2015). Job loss in the Great Recession and its aftermath: US evidence from the displaced workers survey.
No. w21216. National Bureau of Economic Research.

Rutledge, M. S., Orlova, N., & Webb, A. (2013). How will older workers who lose their jobs during the Great Recession fare in
the long-run? CRR WP 2013-9. Center for Retirement Research at Boston College