This stands in contrast to the employment situation for workers 16 years and over. Both the unemployment rate (5.4%) and the number of unemployed persons (8.5 million) edged down in April.

While today's report shows a rise in the share of workers age 55+ with a job - the employment-to-population ratio increased from 38.3% to 38.5%, as an additional 266,000 older workers were counted as employed - this is explained by the fact that 286,000 more older workers entered the labor force in April hoping to find a job. This increased the labor force participation rate for this group from 39.9% to 40.1%. Unfortunately, many of these workers ended up among the 1.37 million older jobseekers who could not find a job.

Older workers continue to make up the second-largest group among the long-term unemployed, those actively seeing employment for 27 weeks or more. In fact, the share of older workers long-term unemployed rose in April - more than 39% of unemployed older workers have been searching for employment for 6 months. As of last month, job seekers between the ages of 55 to 64 spent an average of 46.4 weeks actively looking for work and those 65 years and older spent 47.1 weeks.

As can be seen in Figure 1, workers experience a decline in earnings after ages 55-59 regardless of education levels. 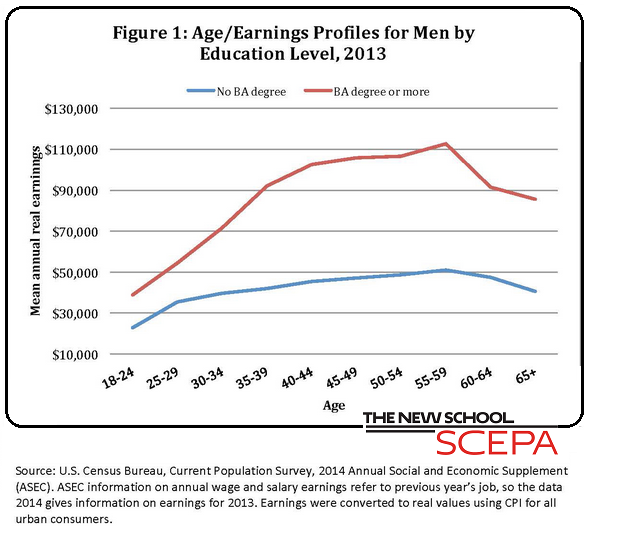 Today's job numbers and what we know about the age/earnings profiles of full-time workers in the U.S. reminds us that work in old age is not the solution to the retirement crisis. To restore the position of older workers in today's job market, we must create new retirement savings vehicles, such as GRAs. Safe pensions and adequate retirement assets allow older workers to explore new jobs that help them transition into retirement, experiment with self-employment, and even quit jobs that don't pay enough to live with dignity and save for retirement.

Older Workers Are Forced Out of The Workforce