The U.S. Department of Labor today announced a slight increase for the unemployment rate for older workers (aged 55 and over) from 3.7% to 3.8% in August. While this number represents 1.3 million older Americans who cannot find a job, this national number hides the fact that some cities are less friendly to older workers than others. 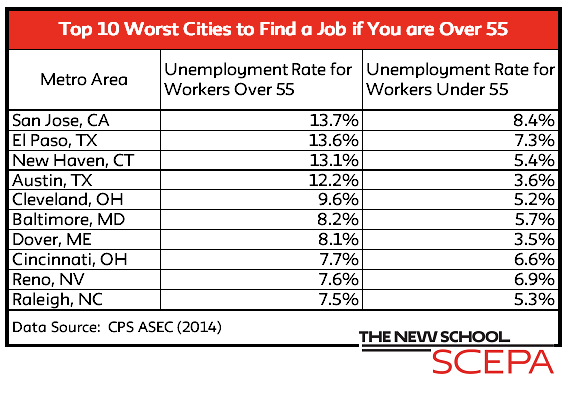 Industry clusters could be to blame. San Jose and Austin are home to hot new tech corridors and New Haven's economy is closely tied to Yale University and its status as a college town. Both would favor employing the young over the old.

There are also regional pockets where older workers struggle to find a job, such as Ohio's Rust Belt cities. Cleveland has an unemployment rate of 9.6% for 55 and over versus 5.2% for workers 54 and under. Cincinnati's older unemployment rate is 7.7% versus 6.6% for younger workers.

Economists have long understood the domino effects of lower wages and decreased bargaining power resulting from high unemployment. Add to this a downward trend in access to retirement savings plans at work and older workers nearing retirement age are increasingly at the mercy of a labor market that cannot meet their needs. Ironically, the less work they can find and the less wages they can save, the longer older workers will need to work.

Only a national solution will ensure that all workers, regardless of where they live, will be able to retire rather than resign themselves to unemployment or low-wage work. Guaranteed Retirement Accounts (GRAs) would ensure a path to retirement by providing a safe, effective vehicle for all workers to save over their working lives.