Last month, we reported that unemployed older workers took longer to find a new job than younger workers. Drilling down to the different experiences of men and women, we find that that the long-term unemployment rate - defined as being unemployed more than 27 weeks - increased faster for older women. 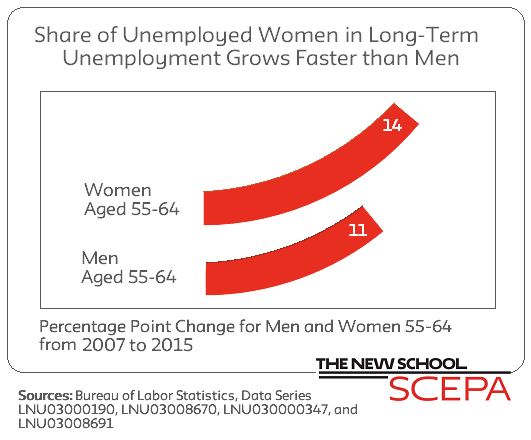 It’s no surprise that long-term unemployment decreases bargaining power by increasing a worker’s willingness to accept a less desirable job. Older women nearing retirement already experienced a lifetime of wage disparity that makes it harder to adequately save for retirement during their working years. For women ages 50-64 without enough retirement income, cutting Social Security by raising the retirement age makes the situation worse. They will be forced to work or look for work longer in a labor market characterized by both age and sex discrimination.

Rather, we need to provide Americans with an adequate, secure income in old age. This will level the labor market playing field, allowing all older Americans to choose between retiring with dignity and taking the time to look for decent jobs that best match their skills. Guaranteed Retirement Accounts (GRAs)are one means of achieving this goal.