Workers Over 62 Without College Struggle in Today's Labor Market

Presidential candidate Chris Christie used the GOP presidential debate to repeat his call to cut Social Security benefits by increasing the retirement age. A benefit cut would require individuals nearing retirement to save more - 28% of whom do not have a retirement savings account. Older workers without a bachelor's degree, about 72% of workers aged 62 and older, are especially disadvantaged in the labor market because their wages have been stuck for the last 30 years. If Social Security benefits are cut, older workers would have less bargaining power in the labor market. 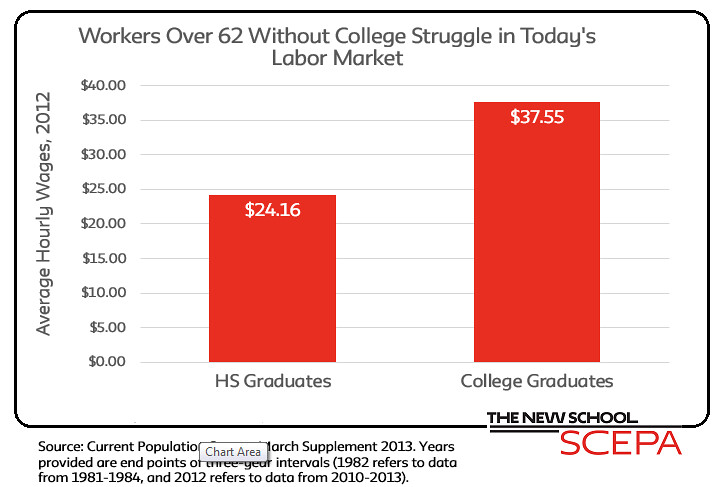 The Department of Labor announced today that the unemployment rate for older workers (aged 55 and up) was 3.7% in July, which remains the same as last month and represents 1.3 million older people who wanted to work but couldn't find a job.

Aside from struggling to find a job, the search for a quality job with good pay is harder for older workers. Workers 62 and over with high school degrees earned $24.16 per hour on average in 2012, just 3.8% more than they earned in real terms in 1982.1 The growing prevalence of low-paying jobs, particularly in the retail sector which employs about 15% of older workers, is a primary reason for wage stagnation and low retirement plan coverage rates in the last 30 years. Fewer than 40% of older workers without a college degree participate in a pension or 401(k)-type plan at work.

Raising the retirement age is not a job creation policy, but a cut in Social Security benefits, a cut that increases retirement insecurity for everyone. Instead of raising the retirement age, presidential hopefuls should consider expanding access to pensions and savings through vehicles such as Guaranteed Retirement Accounts (GRAs). A secure pension, like the GRA, gives older job seekers a cushion and added bargaining power.