Chris Christie and his proposal to raise the retirement age are officially part of the 2016 presidential campaign. While policies like this are debated on the campaign trail, the labor market for older workers needs to be considered.

Today's job report shows the unemployment rate for black older workers is nearly double that of Whites (3.3% for Whites and 5.8% for Blacks). This shows the perseverance of racial disparities in the labor market for older workers despite lower overall unemployment levels over the last year.

Not only is finding work more difficult for non-White older workers, so is saving for retirement if and when employed. For people of color nearing retirement who are in the bottom 50% of the income distribution – those families earning less than $60,000 a year – only 47% of Blacks have retirement coverage at work, 30% of Hispanics/Latinos and 37% for other racial and ethnic groups, including Asians.1 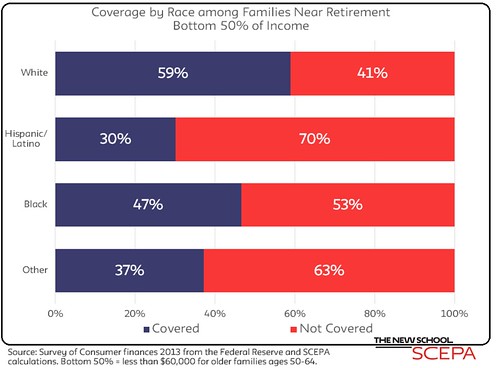 SCEPA has documented how this one-two punch of joblessness coupled with age decreases older workers' bargaining power, further diminishing their ability to save for retirement even if they do find work.

For workers over 55, the labor market – and therefore raising the retirement age - is not a solution. Instead, older workers need access to a strengthened Social Security program and supplemental policy innovations like Guaranteed Retirement Accounts (GRAs).

Older Workers Are Forced Out of The Workforce