However, older workers don’t always have an easy time finding jobs. Since the economic recovery starting in 2009, the labor market for older workers has recovered less robustly than for younger workers. 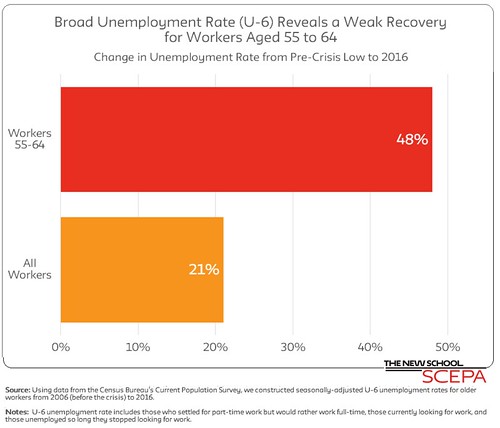 The more inclusive U-6 unemployment rate for workers aged 55 to 64 shows a weaker recovery after the Great Recession. The February 2016 rate of 6.5% (the most recent data available) remains 48% higher than its pre-crisis low of 4.4%, reached in December 2006. In contrast, U-6 for all workers is only 21% higher than its pre-crisis low reached in March 2007.

Rather than forcing older workers to fend for themselves in an unfriendly labor market, we need Guaranteed Retirement Accounts (GRAs) to allow workers a safe, effective vehicle to accumulate savings over their working lives so that those with limited labor market options can retire in dignity.

A Green Recovery from the Pandemic Meltdown