Economic growth can be a rising tide to lift all boats, so we are told. Advocates for cutting Social Security benefits by raising the retirement age imply that economic growth will create jobs for older workers left to work longer. But the data debunks this myth: America’s fastest growing cities have the highest rates of unemployment for older workers. 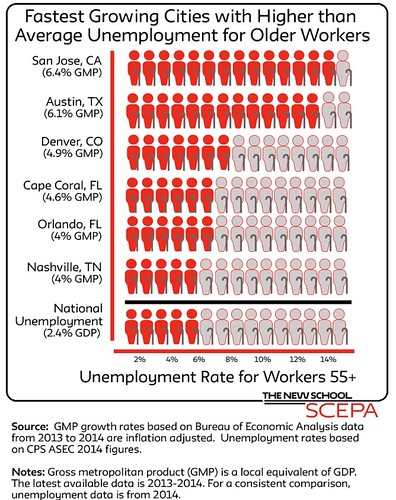 Nationally, this morning’s job report from the Department of Labor reported an October unemployment rate of 3.5% for older workers (aged 55-64). But in the 10 cities with the highest gross metropolitan product (GMP) growth in 2014, the numbers are worse, with 5.6% of older workers unable to find jobs, as compared to a metropolitan average of 4.0%.

Economic growth is not a quick solution to the difficulties faced by older workers who can’t afford to retire. Why? The factors that drive economic growth – a booming tech and finance sector, for example - don’t necessarily produce jobs for older workers. In fact, industry specialization - a key driver of growth - could explain why older workers struggle in booming cities.

The 10 cities with the highest growth in output, over 5.5%, have a higher demand for technology jobs and significantly higher demand for finance, insurance and real estate jobs than the national average. For example, Austin, Texas, and San Jose, California, are home to expanding technology sectors, but recorded unemployment rates for older workers of over 12%. If high growth becomes dependent on jobs requiring knowledge of cutting-edge software at a time when firms are less willing to train workers, older workers will continue to be at a disadvantage in the labor market.

Instead of raising the retirement age, consigning older workers to an unfriendly labor market and increasing risk of old-age poverty, Americans need Guaranteed Retirement Accounts (GRAs), a reliable and effective method to save for retirement.