Unfriendly Labor Market Is A Fact

Older Workers Of All Earnings Fear The Labor Market 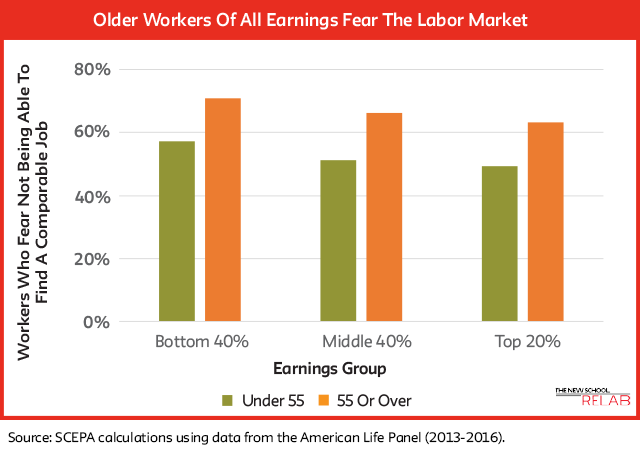 Afraid To Find A New Job, Older Workers Stick To Their Jobs

Knowing they are less employable than younger workers, older workers often don’t attempt to look for a new job. Examining the rate at which workers move from one job to another (without a spell of unemployment) reveals that older workers are not changing jobs as frequently as their younger counterparts. In 2018, workers over 55 were on average 62% less likely to change jobs compared to younger workers (age 18-54).1

From a lack of retirement security to the erosion of workers’ rights and the growth of alternative jobs and the gig economy, a host of factors contribute to older workers’ vulnerability in the labor market.

Because of this well-founded fear, the rate at which older workers quit their jobs remains low, even during a time of historically low unemployment. This signals to employers that they do not need to raise workers’ pay to keep retention rates high and turnover costs low, tilting the balance of power towards employers. Workers who deem themselves less employable — and who are less likely to to quit in hopes of getting a better job — have lower reservation wages (the lowest wage workers will accept to participate in the labor market), further eroding their bargaining power.

Older workers’ fears are founded in fact. Leaving them on their own to navigate an unfriendly labor market and the resulting insecurity further exacerbates their declining bargaining power. The solution is to create policies that give older workers viable alternatives to bad jobs and suppressed wages.

Ensure The Option Of Quality Retirement

Instead of increasing the retirement age, which is equivalent to a cut in benefits, lawmakers should strengthen and expand Social Security, ensuring a reliable fallback option when working longer is not possible. Guaranteed Retirement Accounts (GRAs) would give workers access to a secure and accessible way to save for their retirement and supplement their Social Security benefits. GRAs are a proposal for universal individual accounts funded by employer and employee contributions throughout a worker’s career and a refundable tax credit.

The headline unemployment rate (U-3) for workers ages 55 and up is 2.5% this quarter (from October to December), which represents a 0.1% decline from last quarter. ReLab’s U-7 figure includes everyone in headline unemployment, plus marginally attached and discouraged workers, involuntary part-time workers, and the involuntarily retired (those who say they want a job but have not looked in over a year). U-7 decreased from 5.5% to 5.2% in the last three months.

Compared to their younger counterparts, older workers are less able to recover from the financial shock of losing a job. For them, job loss often leads to lower wages, lower-quality jobs and has more severe health consequences. Older workers experiencing job loss take one month longer than younger workers, on average, to find a new job. In 2019, older workers spent 24 weeks looking for a job compared to 20 weeks for younger workers. The average number of weeks spent unemployed has increased for both age groups since the peak of the last business cycle (2007). As older workers’ time looking for work stretches out, many tap into their retirement savings, further compromising their standards of living once they retire. 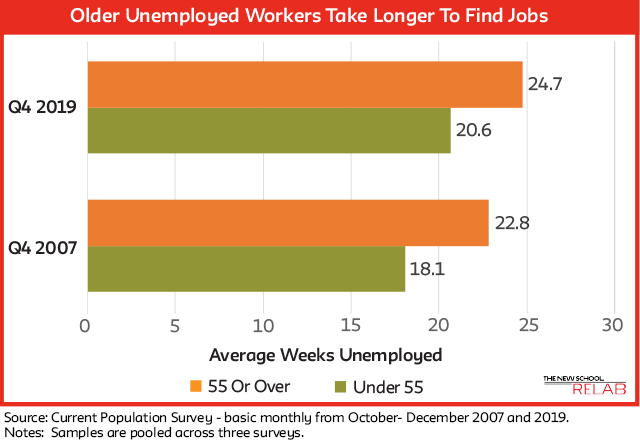 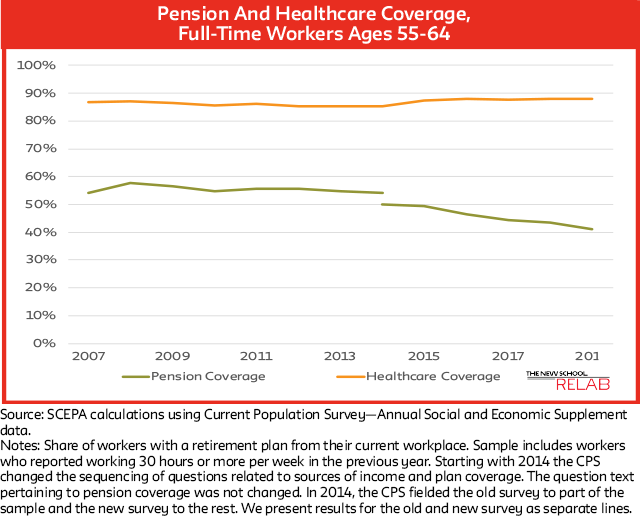