The Department of Labor today announced the September unemployment rate for workers between the ages of 55-64 was 3.6%. A slight decrease (0.4%) from last month's rate of 4.0%, this represents 945,000 older workers struggling in the labor market.

But economists know this number is too low and underestimates how soft the labor market is, for three reasons.

The first two apply to all workers. By counting only those who have searched for a job within the past four weeks, it leaves out people working part-time because they can't find a full-time job and "discouraged" workers who haven't been able to find a job for so long they have stopped looking. These are known as the hidden unemployed. 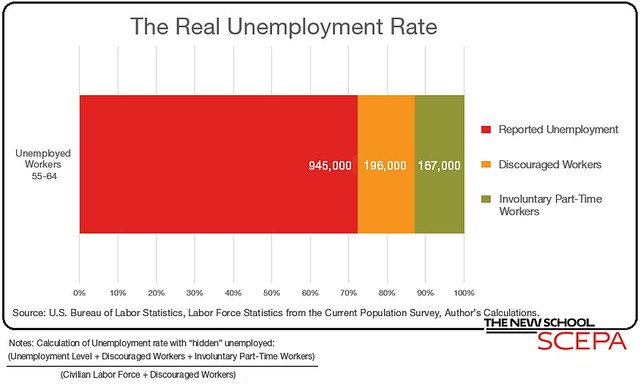 For older workers, this adjusted number is still too low. If they can't find a job or can only find a low-wage or part-time job, older workers have the option to leave the ranks of the officially unemployed, or even the discouraged, and retire early. While this sounds like a good option, these folks pay a steep price for choosing to leave an unfriendly labor market. Known as being "pushed" into retirement, they are in danger of facing downward mobility throughout their old age by accessing Social Security and their retirement savings earlier than planned.

The labor market for older workers is far more vulnerable in real life than in statistics. This reality proves that proposals to raise the retirement age would only exacerbate this labor mismatch - further increasing the supply of older workers without a corresponding increase in the supply of employment opportunities. It also highlights the need to create savings vehicles for workers, such as Guaranteed Retirement Accounts, that would provide a lifetime stream of income to retirees to help them maintain their living standards should they chose to leave the labor market.