This morning's release of the February monthly employment report shows steady job growth in the economy, but provides no reason to cut government spending or stop calling for more economic stimulus.

Nonfarm payroll employment rose by 227,000 jobs, across almost all sectors. In the last three months, jobs have risen by an average of 245,000 per month, and by 3.5 million since the low point in February of 2010. The unemployment rate stayed at 8.3 percent, because labor force participation increased as some of those out of the labor market come back in, lured by growing employment. 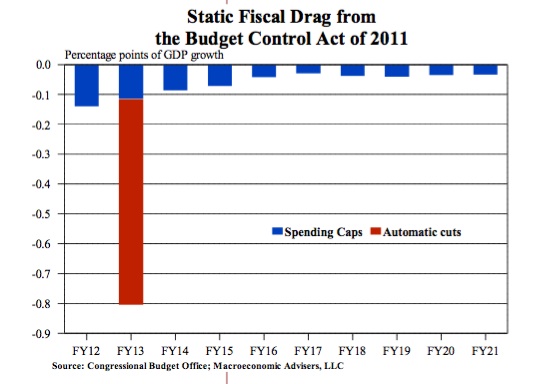 So why isn't this unambiguously good news? First, we are still far, far from full employment. The Atlanta Federal Reserve has a nice jobs calculator on their website, allowing easy estimation of how long it will take to reach a certain unemployment rate. To get to 5.5 percent unemployment, we need another 30 consecutive months of job growth at February's level.

Well, isn't that possible if the economy is growing steadily? A second problem is that falling unemployment will increase calls for cutting government spending, which will in turn slow economic and job growth. As this chart shows, Macroeconomic Advisors has estimated that the current deficit reduction package resulting from Congressional failure to reach a deal last year will produce a static fiscal drag (that is, before multiplier effects) of close to a full percentage point of GDP. The economic recovery still needs stimulus, not drag, especially if the Eurozone crisis continues.

Politically, the February job numbers are good for President Obama. Ronald Reagan was re-elected in 1984 in a landslide, when unemployment was at 7.2 percent. If the February job rate keeps up, it would take the economy another 11 months to hit that number, but if the trend stays in the right direction, Obama will be stronger. There's no chance he will win in a Reagan-esque landslide, but continuing job growth will help him substantially. The data shows that job growth is still fragile, and any economic policy that calls for contraction or imposes austerity would choke off confidence and stall recovery.