Important shifts are occurring in the understanding of capitalism, the political economy of aging, labor markets, climate change, and inequality. As the world changes, our economic thinking and training must keep up to remain useful for building a more inclusive society and economy that are resilient. Heterodox economics, the cornerstone of The New School’s economic teaching, is a framework that responds to these needs. In the Future of Heterodox Economics, the authors assess the flaws and strengths of heterodox economic theory and how students are trained. They find that it is essential to deepen our engagement with mainstream actors, strengthen heterodox theory, encourage the use of large data and policy work, and combine theories of institutions, power, racism, and sexism within economics. 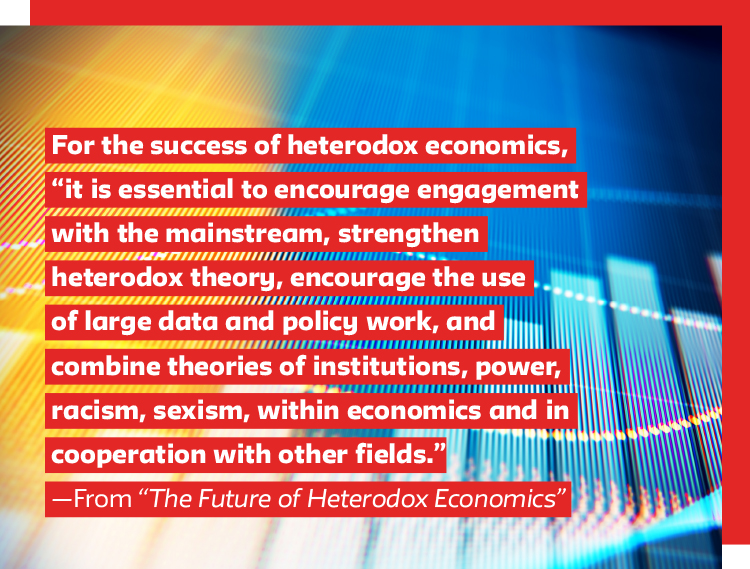 One of the most important contributions of economic policy analysis is to bring the future forward. Often, what we need in society has short-term costs but promises significant future gains. Without an economic analysis of the costs and benefits of potential investments (and the costs of not making those investments), we may never spend what it takes to build a sustainable and equitable future.

One economic policy that brings the future forward is investing now to mitigate and adapt to climate change. Meaningful policy solutions must account for the consequences of climate change and shocks. In Climate Shocks & Child Labor, New School economists Feridoon Koohi-Kamali and Amit Roy find that climate disasters increase the use of child labor and that higher levels of education and better health can help protect children from having to work when environmental disasters strike. Because current social safety net programs are insufficient to provide for the basic needs of climate-shocked poor households, Fiscal Policies for a Low-Carbon Economy is also necessary to achieve a low-carbon future. The report finds clear evidence that green bonds can support carbon taxation by acting as a bridge financing instrument, smoothing the path to transition.

Another area of economic policy that brings the future forward is assessing the short-term costs and long-term gains of increasing older workers’ bargaining power in the labor market. Older workers are a growing share of the workforce—over 42 percent of the 11 million jobs created in the next ten years will be filled by workers 55 and older. Their pay and working conditions will not increase if the workforce doesn’t have bargaining power and financial resiliency. Of course, these challenges affect workers at all ages. In an economy defined by bargaining relationships and power, workers need a strong fallback position to command stronger wages, benefits, rights, and conditions on the job. But in Trends in Employer-Sponsored Retirement Plan Access and Participation, Radpour, et al. find that retirement plan participation is low and stagnating, primarily because employers choose not to offer employees access to these plans. The current American retirement system leaves out half of workers, especially low-income workers and minorities.

As a result of this grim reality, working longer is often proposed as the solution to the retirement crisis. But in Working Longer Can’t Solve the Retirement Crisis, Ghilarducci, et al. find that retirement doesn’t lead to the promised benefits, due in part to early Social Security claiming to supplement low wages. In their report, Is the Adjustment of Social Security Benefits Actuarially Fair, and If So, for Whom? Irena Dushi, Leora Friedberg, and Anthony Webb find that while Social Security is designed to deliver benefits that are equal in expectation, regardless of whether they are claimed as early as age 62 or as late as age 70, this is no longer the case. An inequality in lifetime benefit payouts has arisen due to increasing disparities in lifespans, the relationship between lifespan inequality and earnings inequality, and widening disparities in claim ages.

In previous years, we identified 10 policies to strengthen older workers’ power to negotiate better pay and working conditions. Negotiators with lower costs of “walking away” from the bargaining table have stronger bargaining positions. One such policy—expanding the Earned Income Tax Credit (EITC), which targets refundable tax credits to low-income workers—would benefit 1.5 million older workers, according to Ghilarducci and her co-authors. Tempering this finding, however, in Who Does the EITC Benefit? Research Associates Owen Davis and Aida Farmand find that the EITC reduces wages for workers without college degrees. These findings prompt a reconsideration of the redistributive effects of the EITC, particularly for groups like older low-wage workers who face slower wage growth because of the policy.

Employment and Retirement During the Covid-19 Pandemic

The pandemic compounded many of the challenges facing older workers and workers at large. As we continue to recover from the recession, the drastic job loss experienced by older workers reveals the risk they face when working longer is the policy substitute for an effective retirement security system. In Dissecting the Pandemic Retirement Surge, SCEPA Research Associate Owen Davis finds that employment declines among older workers were greatest for low earners, women, non-whites, and non-college-educated workers.

Return to the 2021 Annual Report or read more about the Director's Message, Policy Highlights, Press, Engagement, or Partnerships and Support.