Brief— ReLab's chartbook documenting retirement insecurity and the decline in older workers' bargaining power is a resource for workers, employers, media, policymakers, scholars, and the broader public to answer questions about the state of older working America and retirement income security.

If we do nothing to fix our retirement system, 43 million people now in their fifties and early sixties will be poor or near-poor elders, owing to both the recession and to inadequate retirement plans.1 Widespread retirement insecurity weakens older workers’ bargaining power. Without a solid fallback plan, older workers must accept whatever wages are offered.

Retirement Crisis | What is the current state of American retirement security? 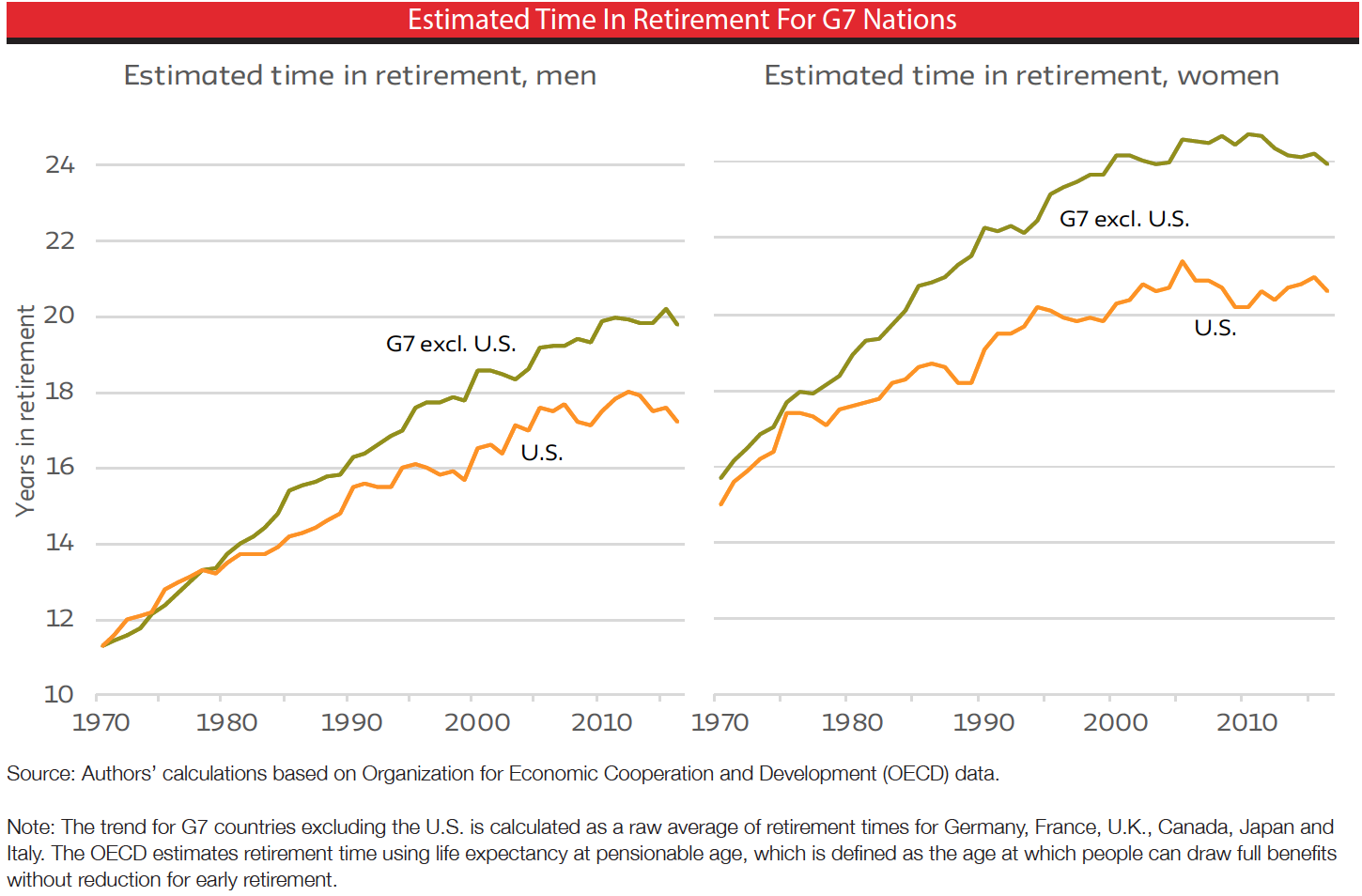 Bargaining Power | How are older workers faring in the American labor market?

Half Of Retirees Are Pushed Into Retirement 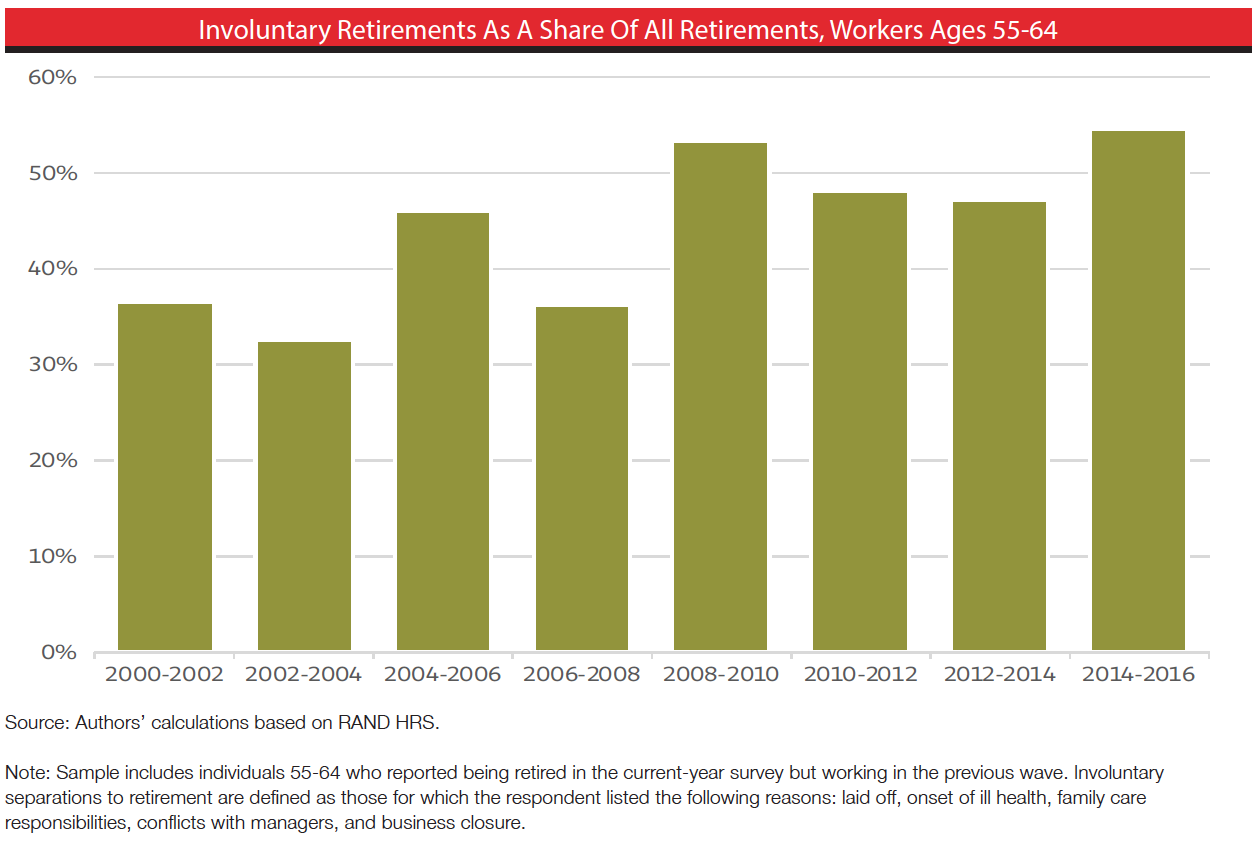 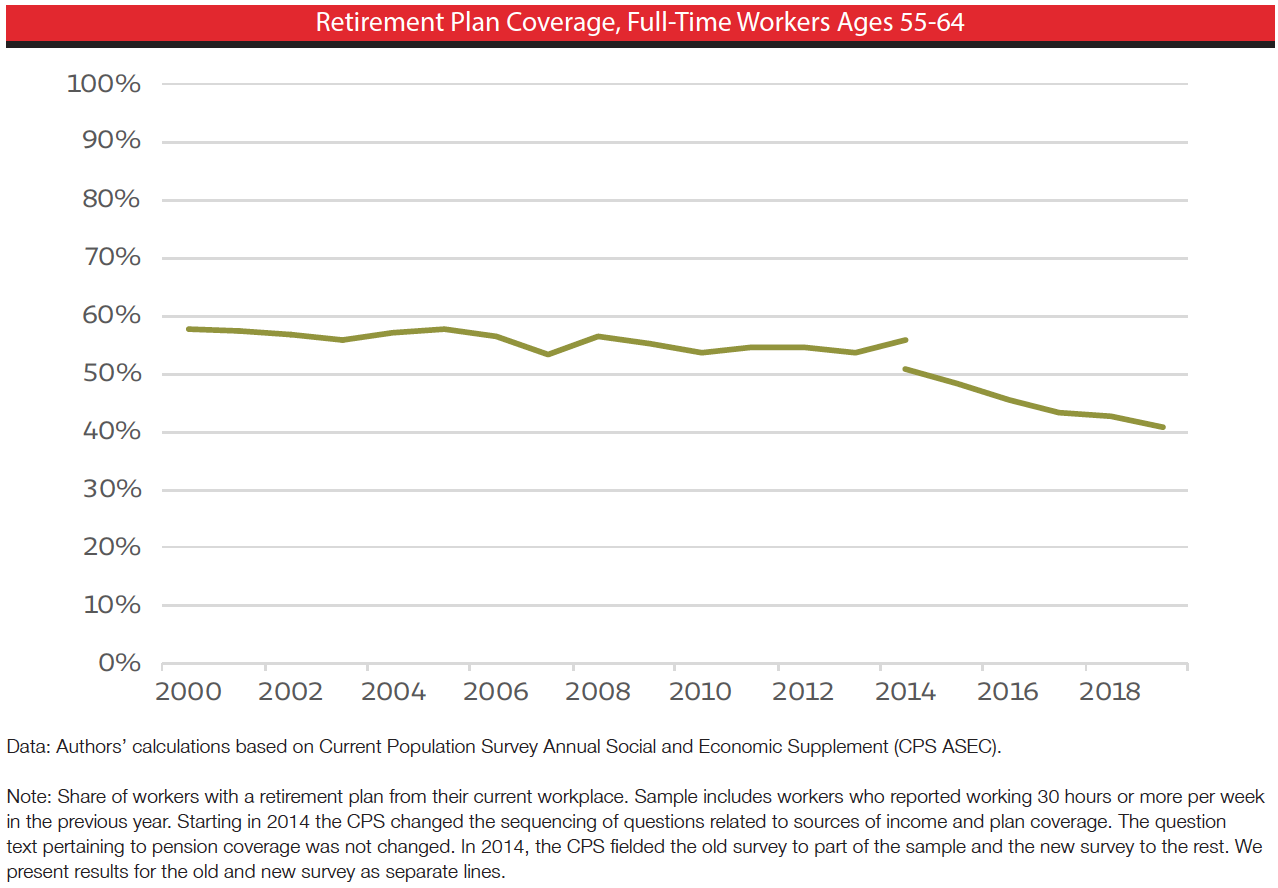 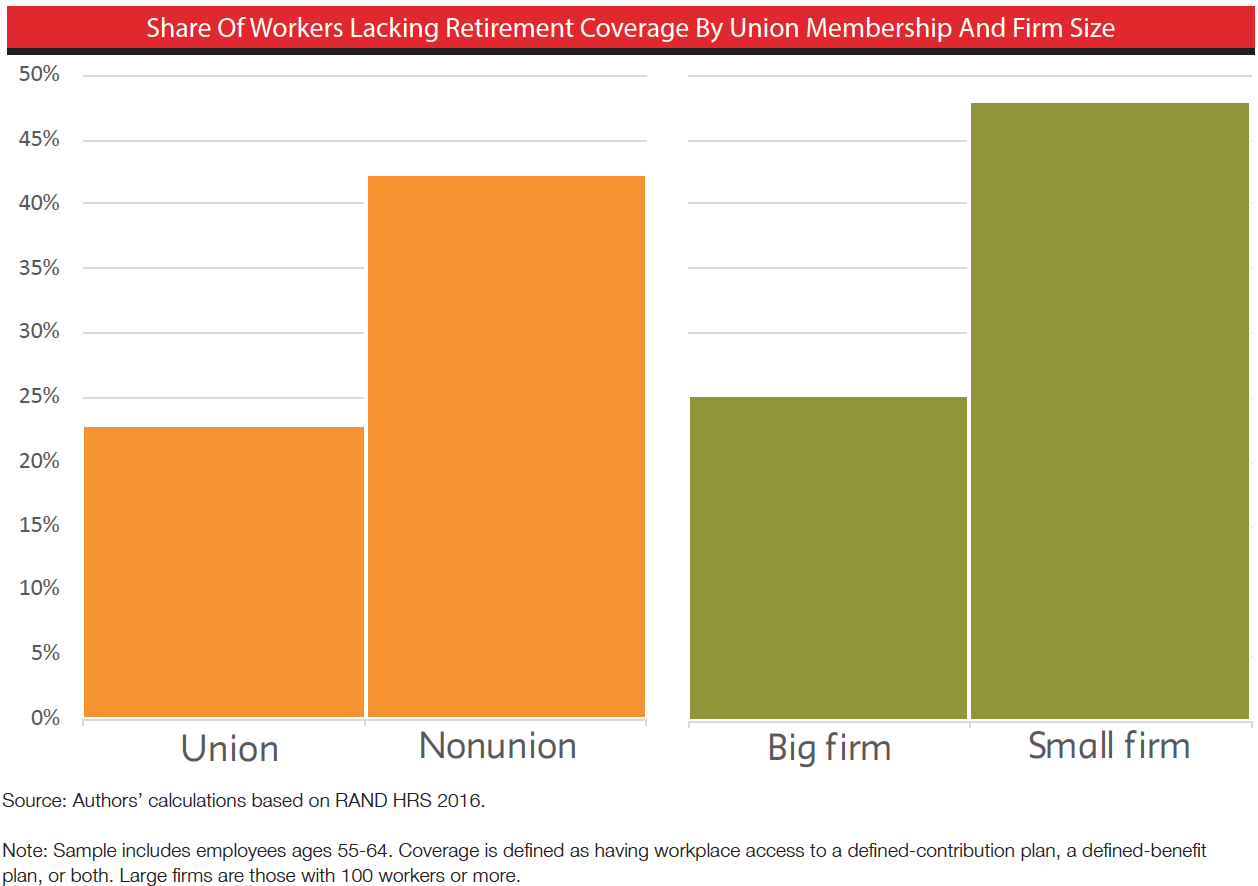 Retirement coverage varies widely across the labor market. Among the groups that are more likely to lack retirement plans at work are employees at small firms—defined here as those employing fewer than 100 workers—as well as those who are not covered by union contracts. The share of workers lacking retirement coverage is nearly twice as high for nonunion workers compared to workers who belong to unions, a disparity that also holds for workers at small firms relative to those at large employers. 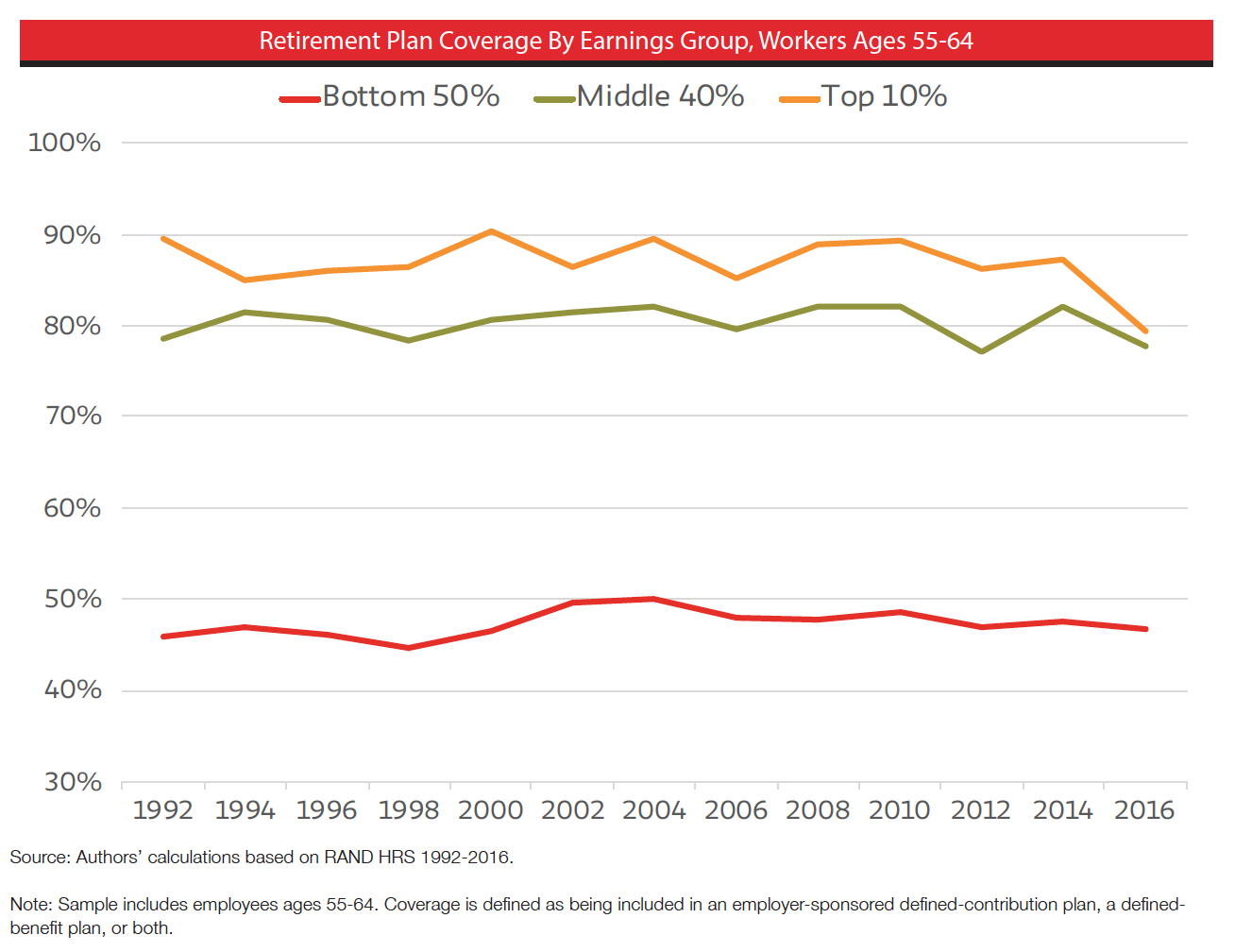 The individualized, do-it-yourself American retirement system doubly disadvantages lower-income workers. Not only are they unable to accumulate as much retirement savings as higher income workers, they also face far lower rates of employer-based coverage at the job. Since the mid-2000s, older workers below the median wage have seen their rate of retirement coverage steadily fall, from 50% in 2002 to 47% as of the most recent data in 2016. Middle-class and higher-income workers have also experienced declining coverage in recent years. 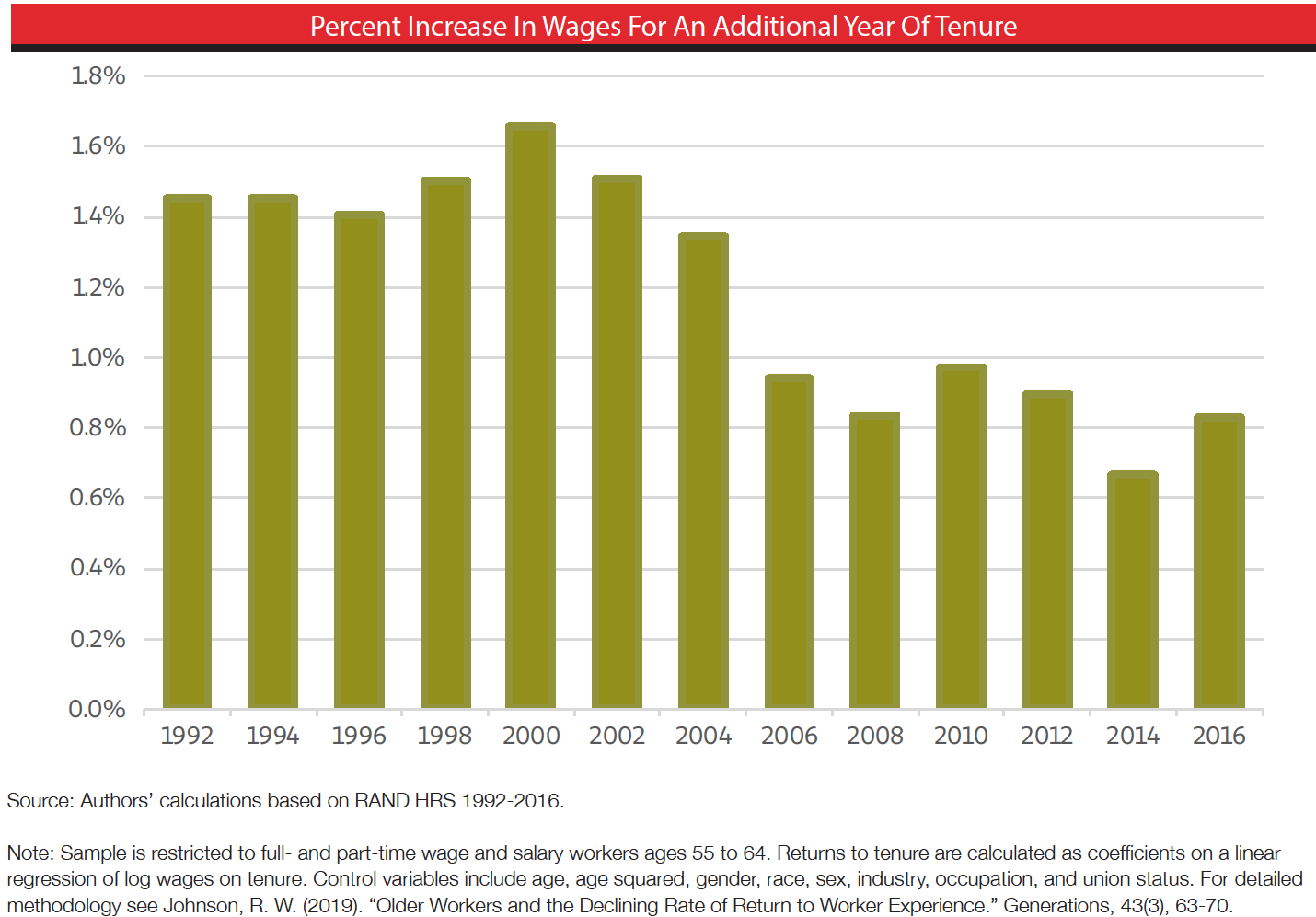 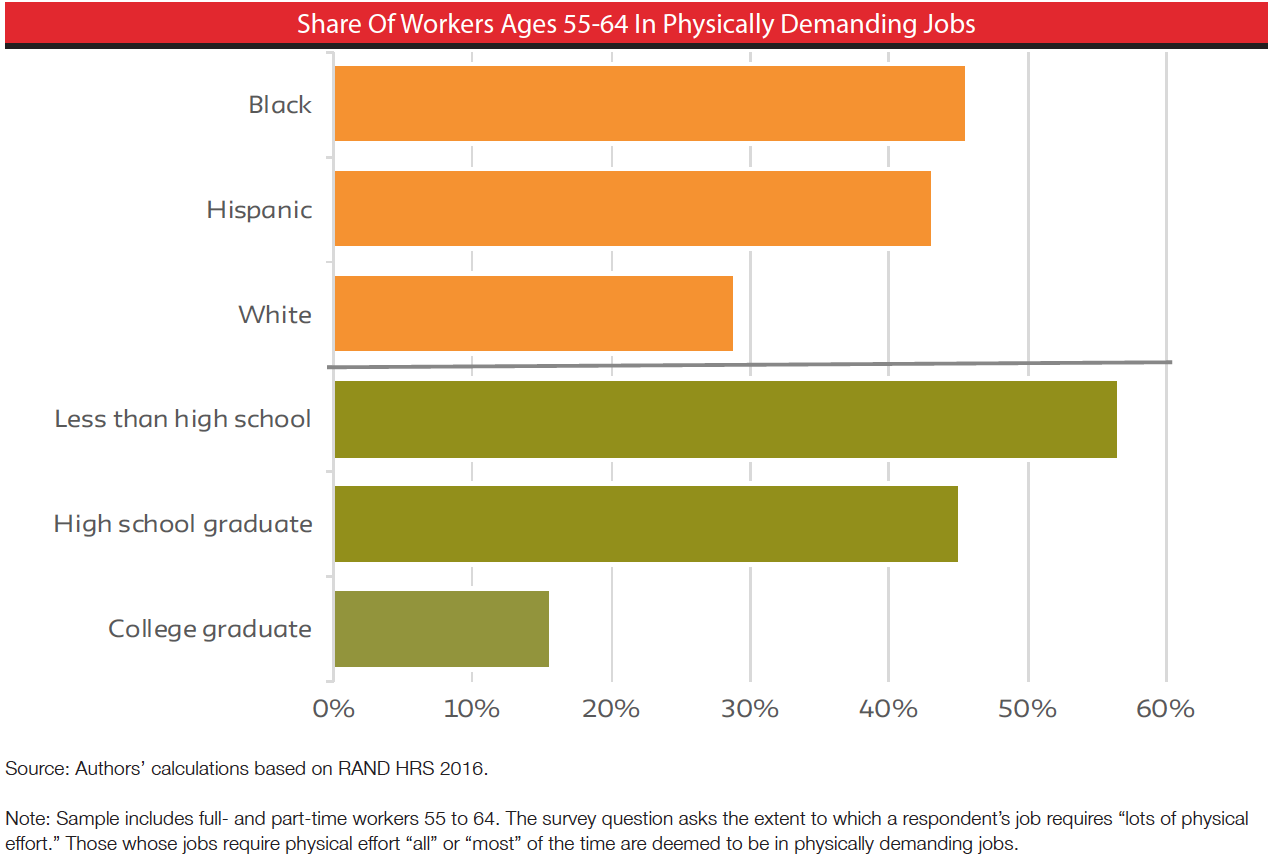 Older workers perform more physically taxing work than might be expected. On the whole, nearly 30 percent of workers 55 to 64 are in jobs that require “lots of physical effort” most or all of the time. That physically demanding work is not distributed equally. More than 40 percent of Black and Hispanic workers toil in physically demanding jobs, compared to less than 30 percent of white workers. Workers without more than a high school degree are more than three times as likely as college graduates to find their jobs strenuous on the body.

Elders In The U.S. Work Longer Hours Than In Most Other Developed Countries 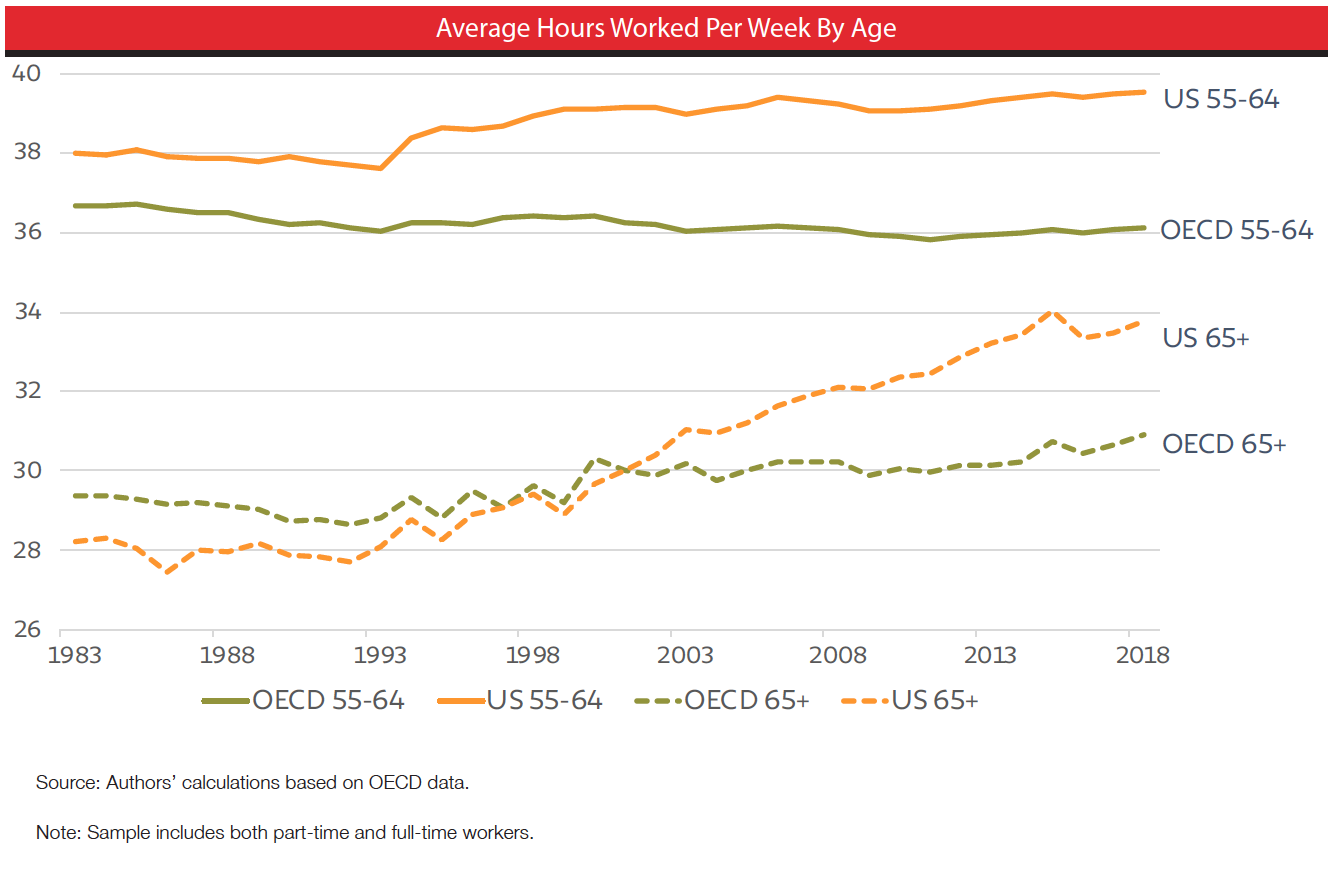 Not only do American elders enjoy less time in retirement relative to similar nations (see Chart 5), but they also work longer hours before retiring. Beginning in the 1990s, a large gap opened up between the U.S. and nations in the OECD in average hours worked by those 55 and older. For those between 55 and 64 years old, Americans now work close to 40 hours a week, more than 10 percent more hours than elders in the OECD group of large economies. A major part of this divergence stems from retirement policy: Americans work longer and harder in order to scrape together savings in a retirement system that is stacked against them. 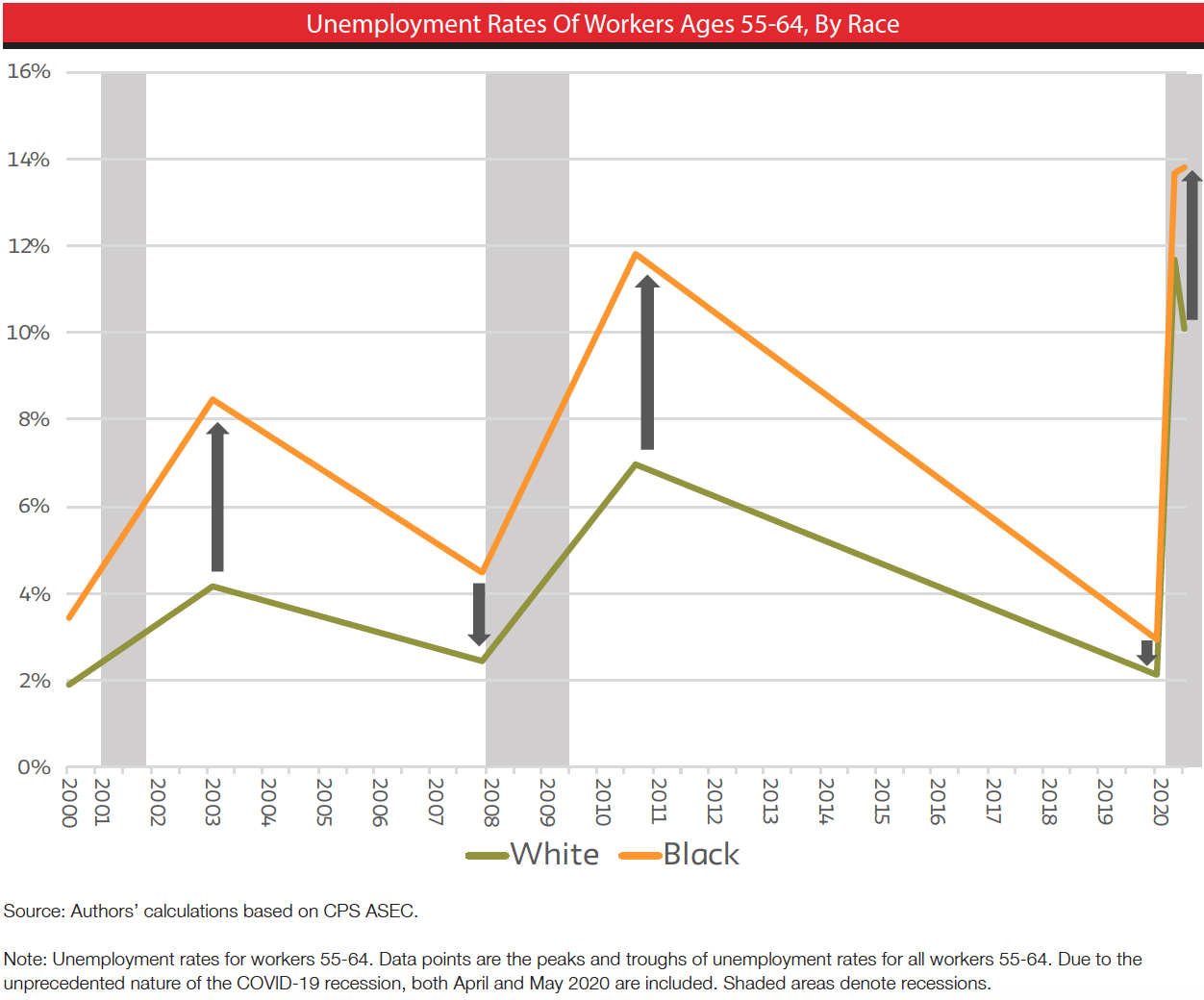 The Aging Workforce | How has the age profile of the U.S. labor force changed?

The U.S. Population And Workforce Is Aging 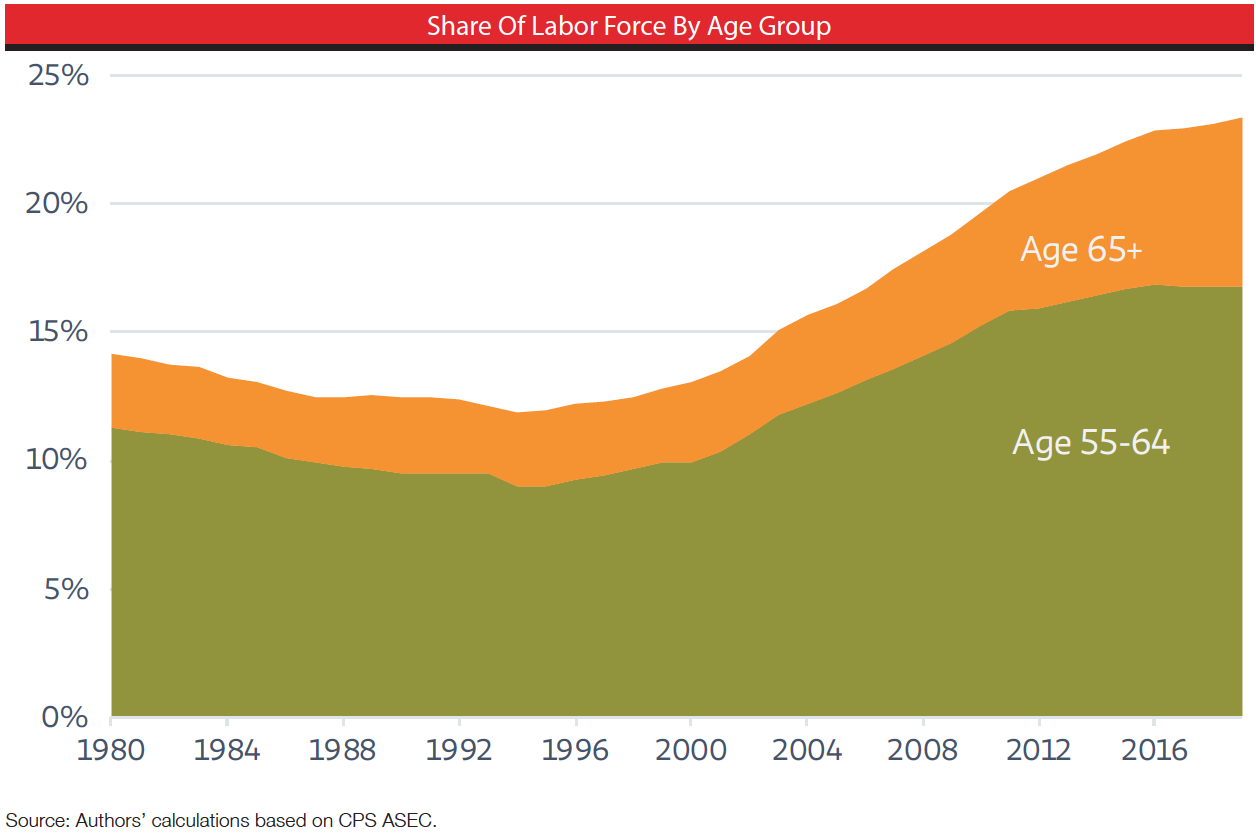 Older workers are becoming a substantial share of the American labor market. In the 1990s, around 13 percent of those working or looking for work were aged 55 to 64. Today, that share is more than 23 percent. Part of this trend is demographic: the 75 million-strong Baby Boomer generation began turning 55 in 1999, leading to a rapid rise in the share of older workers. But as Boomers retire, the median age of the labor force is expected to stay elevated as workers push back retirement. Older people are working longer because they have to—their retirement income is less secure, which weakens their fallback position in negotiating wages, hours, and working conditions.

Older Workers Will Drive Labor Force Growth Over The Next Decade 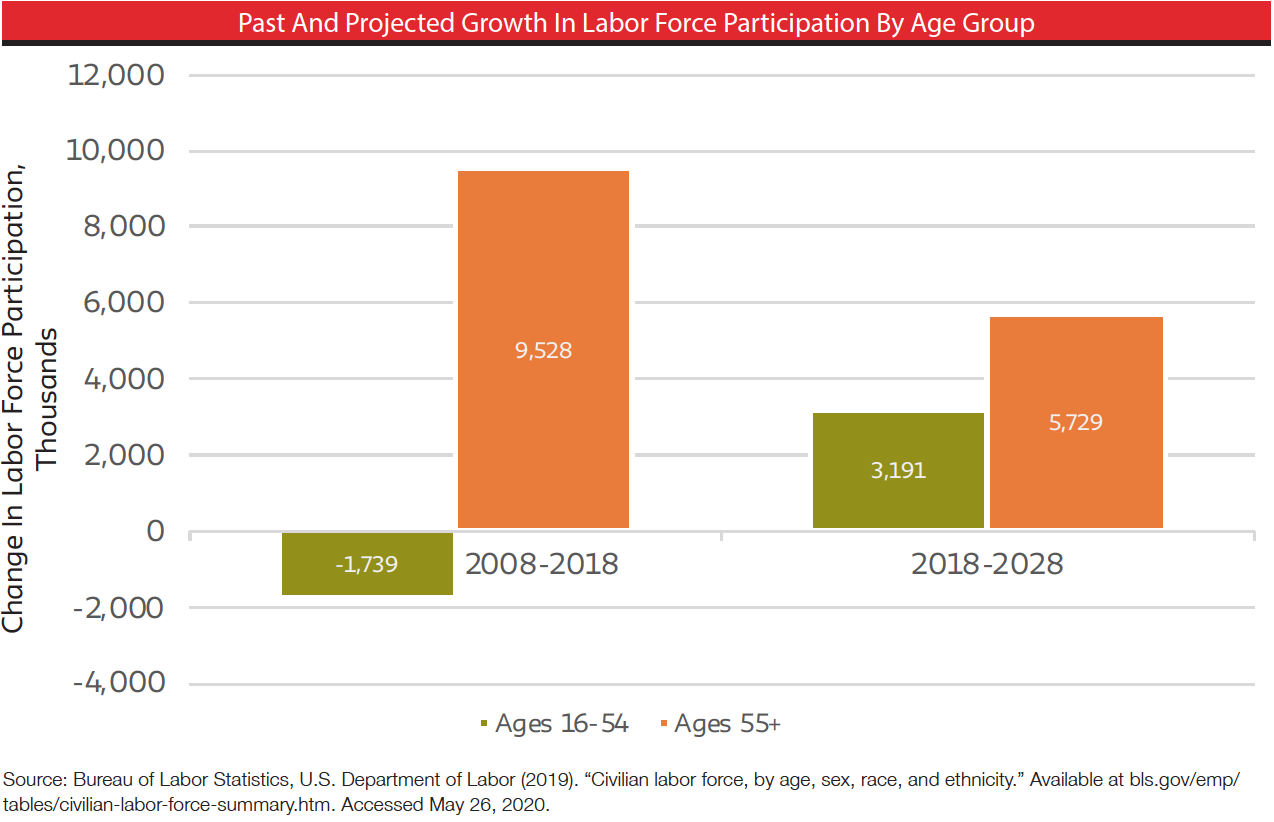 Over the past decade, the net growth in the U.S. labor force came entirely from rising numbers of older workers. Employment projections from the Bureau of Labor Statistics predict that in the 2020s workers 55 and over will continue to represent the majority of labor force growth. Increasingly, the working conditions of older Americans will be the working conditions of all Americans.

2. Housing debt includes all mortgages on the primary residence as well as other loans against the primary residence. Liquid assets include stocks, bonds, checking and savings accounts, and other reported non-housing assets. Retirement savings are excluded from liquid assets. For a similar methodology, see Lusardi, A., O. Mitchell, and N. Oggero (2018). “The Changing Face of Debt and Financial Fragility at Older Ages.” AEA Papers and Proceedings, 108: 407–411.