Backgrounder: What is the Retirement Crisis?

ReLab’s backgrounder spells out the problem of the retirement crisis, the causes and necessary solutions.

Most workers approaching retirement do not have enough saved to maintain their living standards in retirement, regardless of income. The typical older worker in the bottom 50% of the income distribution (earning less than $40,000/year) has nothing saved for retirement.  The median savings of worker in the middle 40% (earning between $40,000 and $115,000/year) are only $60,000. Among workers in the top 10% of the income distribution (above $115,000/year), the median amount saved is $200,000. 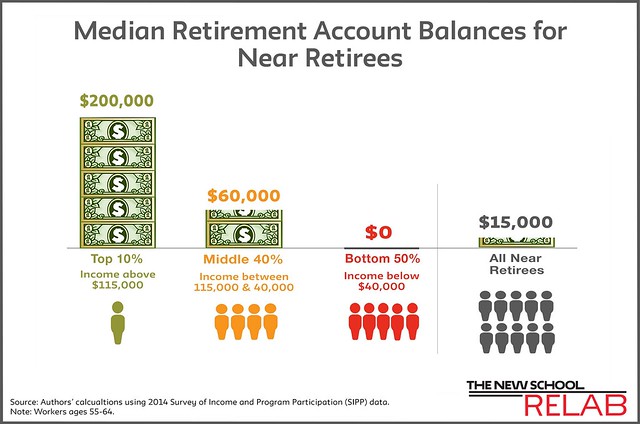 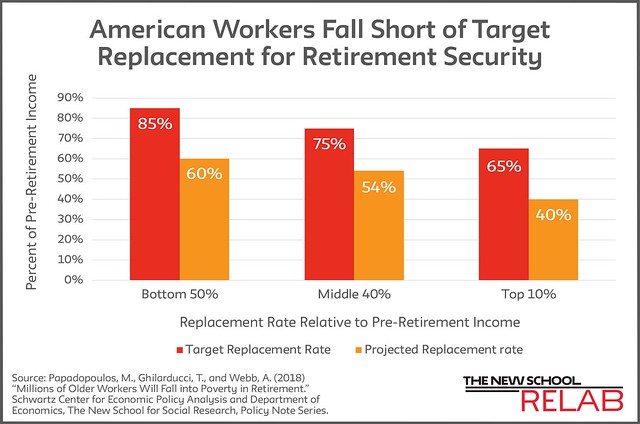 The systemic problem of inadequate retirement saving leaves retirees at risk of experiencing a sharp decline in their living standards. With less income in retirement, many will have no choice but to cut back. For some, this deprivation means falling into poverty or near-poverty when they retire.

ReLab defines workers as downwardly mobile if their and their spouse’s current income is more than twice the 2014 Federal Poverty Level ($23,340 for a single individual and $31,260 for a couple), but projected to fall below this level in retirement. Relab projects that out of 21.5 million older workers ages 50-60 and their spouses who are not poor or near poor, 8.5 million - or 40% - will fall into poverty or near poverty when they retire at 62.

The CAUSE: The “Do-It-Yourself” Retirement System Has Failed

Since the 1980s, employers have increasingly replaced their defined benefit (DB) pensions with defined contribution (DC) savings accounts such as the 401(k). DC accounts fail American workers for the following reasons: participation is voluntary and conditional on the employer offering a plan, so that many contribute sporadically, if at all; many withdraw funds before retirement; investment returns are eroded by high fees and sub-optimal portfolios; balances are paid out as lump sums rather than in the form of a lifetime income; and the tax preferences for retirement savings disproportionately benefit high earners. 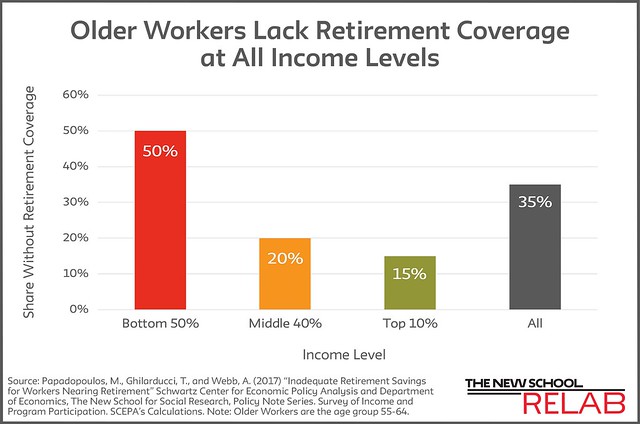 THE SOLUTION: NOT “NUDGES” OR WORKING LONGER, BUT SYSTEMIC CHANGE

Scholars and analysts who view the retirement crisis as a problem of human error and poor individual choices offer two solutions: behaviorial “nudges” to increase savings, such as auto-enrollment into existing DC plans and auto-escalation of account contributions, and working longer.

1. Nudges Are Not Enough

Behavioral nudges are inadequate for the task as they ignore the reality that almost all workers experience swings in income over their careers that make it difficult to maintain the consistent contributions necessary to accumulate enough retirement savings in a 401(k)-type account. Over a working lifetime, almost all workers experience multiple unemployment spells lasting over a year and reductions in earnings of 10% or more, with the bottom 50% of earners more vulnerable to both. When these income shocks occur, DC accounts are often tapped, serving double-duty as both emergency funds and retirement saving and making them less effective at both.

If workers with inadequate savings are forced to work longer to avoid deprivation in retirement, the quantity and quality of the jobs available to them is dependent on the whims of the labor market. Currently, the labor market for older workers leaves many suffering from long-term unemployment, low wages, and a lack of employer-sponsored retirement coverage, particularly for older women. Additionally, many older workers cannot continue working due to physical limitations, particularly black workers.

Given these realities of the labor market, a structural change in how we approach retirement security is necessary to solve the retirement crisis.

Conceived as “pensions for all”, GRAs are universal, professionally-managed, portable, mandatory retirement savings accounts. Workers and their employers split annual contributions of at least 3% of wages. Additionally, GRAs benefit from risk-pooling, guarantee workers’ principal, provide a tax credit to offset low-earners’ contributions, and prohibit early withdrawals to ensure savings are preserved for retirement.

GRAs are designed to close the gap in retirement savings left by the loss of traditional DB pensions in the workplace, low access to any kind of coverage on the job, and inefficient DC accounts such as 401(k)s. They provide a safe, effective vehicle for workers to accumulate personal retirement savings over their working lives.

Note: With the exception of downward mobility, our analysis of the retirement crisis focuses on individuals, rather than households. The reality of growing divorce rates among near-retirees, and the disproportionate effects of divorce on women’s health and financial security, make it imperative that retirement income adequacy be studied at the individual level. When estimating the risk of downward mobility, we focus on the household, not the individual, because poverty is measured at the household level.