SCEPA's working paper on the costs of the city's Hudson Yards project was featured in the New York Times, New York 1, Gothamist, New York Magazine's Intelligencer, CityLab, the Guardian, and a New York Post editorial, among others. The article below was featured in Urban Matters, a publication of the Center for New York City Affairs.

Amazon bailed on its HQ2 plans in Long Island City when residents started questioning the project’s billions of dollars in taxpayer subsidies. Unfortunately, we didn’t ask the same questions concerning Hudson Yards, now set for a March 15 “grand opening.” Why? Probably because we were told the project wouldn’t cost us anything.

In 2005, Mayor Michael Bloomberg assured city residents we could build infrastructureneeded to redevelop a post-industrial stretch of Manhattan’s Far West Side without bearing the costs by using a version of tax increment financing, or “TIF.” However, 14 years later the City has spent an additional $2.2 billion in taxpayer dollars to build what we know today as Hudson Yards. That’s a far cry from being “self-financing.” And it prompts the question: Would New Yorkers have chosen to build a new commercial office district in Manhattan if they understood that rather than it being cost-free, we would end up footing a $2.2 billion bill?

Projects using TIF-type financing are described as “self-financing” based on the theory the revenue generated by a development will pay back the costs of realizing it. However, as the case of Hudson Yards shows, the theory often doesn’t reflect the reality when projects are implemented.

The City rezoned Hudson Yards and decided to build new infrastructure to incentivize commercial office development intended to stem a tide of office leases lost to New Jersey and Connecticut. Using a TIF-type financing structure, $3.5 billion in bonds was issued to finance westward extension of the Number 7 subway line to the area and build a park to wind through the projected new office buildings.

Under the definition of “self-financing” used for TIF-type projects, these bonds would be paid back by designated revenue sources generated by the project. In this case, the City created a set of revenue streams, including payments in lieu of property taxes (PILOTs) and development fees, dedicated to retiring the debt.

But it didn’t go as planned. Instead, the project hit hurdles commonly associated with megaprojects, including revenue shortfalls, cost overruns and spillovers, as well as revenue lost to tax breaks. Taxpayers picked up the tab, paying: 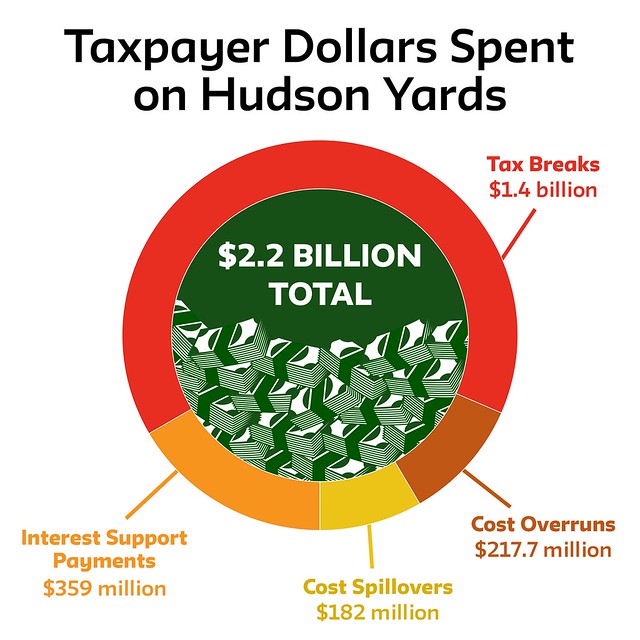 The Bloomberg Administration’s central argument for the development of Hudson Yards was the need to build office stock to reverse New York City’s dwindling share of the region’s demand for commercial office space. However, rather than bringing in new office businesses from New Jersey and Connecticut, 90 percent of Hudson Yards commercial tenants have come from Midtown, which has seen its vacancy rate rise in recent years. At a $2.2 billion cost, the Hudson Yards project arguably may have spurred economic growth. However, it may also be simply shifting the city’s existing economic activity to Hudson Yards without creating new net economic growth.

Some say that over a long enough time horizon, new development in Hudson Yards will bring in the general revenues needed to pay for itself, such as sales and incomes taxes. But this is not the definition of “self-financing” used to sell the project. Rather, the PILOTs and other designated revenue streams were promised to be enough. And when they didn’t come through, the City taxpayer was on the hook.

Labeling a project as “self-financing” is, in itself, a powerful political argument. Who wouldn’t support something that sounds free? But the label bypasses a necessary discussion of risks and costs inherent in financing an urban megaproject, and can short-circuit essential public debate about potentially substantial costs to taxpayers. As New York City looks for new ways to build, Hudson Yards should be a reminder that when you hear “self-financing,” buyer beware.