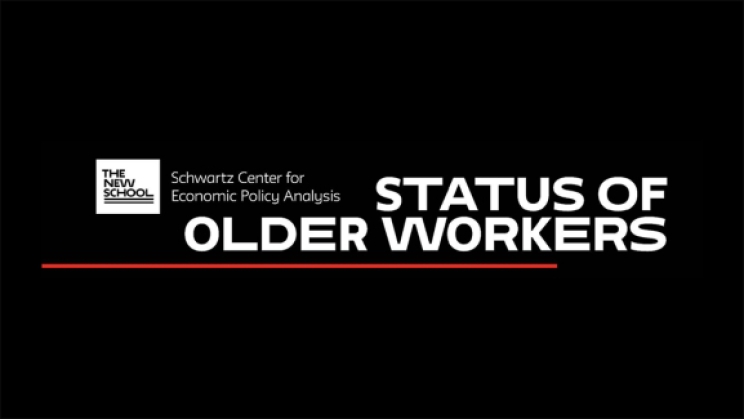 With inflation now a top concern among the U.S. public, workers face a race between wage gains and price increases. Older workers, despite receiving better raises than they have in many years, are losing that race. Like the rest of the labor force, older workers have benefited from significant increases in their hourly pay: in the past six months, median year-over-year wage growth averaged 3.9 percent for workers 55 and older — up from wage growth of 2.4 percent before the pandemic (Figure 1). Nevertheless, while pay is growing relatively quickly for older workers, their wage growth still lags behind that of mid-career workers (ages 35 to 54). And nominal wage growth — which is unadjusted for inflation — has been surpassed by a steep rise in prices over the past year, causing a decline in older workers’ standard of living.

Despite these setbacks, inequality is decreasing somewhat for older workers, as those who occupy the lowest-wage jobs are experiencing the highest wage growth. Meanwhile, retirees have begun to return to the labor force, though it remains too early to tell whether they will do so in numbers that will reverse the rise in retirements during the Covid pandemic.

Figure 1: Wages are rising for most — but more slowly for older workers

Lowest earners benefit while the middle is squeezed

If there is a silver lining in recent wage trends for older workers, it is reduced wage inequality. Older workers who occupy the lowest-wage jobs are experiencing the highest growth of any wage group. Meanwhile, older workers in the middle have seen roughly the same median wage growth in the past six months as they did just before the pandemic, while the highest-wage group has seen slightly higher wage growth (see Technical Appendix for details regarding these wage groups). Looking at older workers’ wage growth trends by demographic categories — gender, race, education — reveals only minor differences between groups.

Though older workers in the lowest-paid jobs are enjoying the largest wage increases, many were forced out of the labor force by the pandemic.1 Their plight is not reflected in the wage numbers. Of the many older workers who disappeared from the labor force during the pandemic, most belonged to this lowest-paid group, which is about one million workers short of what we would normally expect, absent the Covid-19 shock.2

Figure 3: Among older workers, those in the lowest-paid jobs are seeing the biggest pay raises

Unretirement is rising, but it’s not (yet) enough to reverse the Covid retirement boom

In recent months, the phenomenon of “unretirement” — return to the workforce among those who previously reported that they were retired — has attracted significant media attention. Some unretirement is to be expected due to the confluence of rising nominal wages, high inflation, and falling asset prices. The question is whether current unretirement trends have reached a scale comparable to the rise in retirement brought about by the pandemic.3

In May, after rising steadily throughout 2022, the rate of unretirement reached its highest level in more than a decade. Nevertheless, the number of excess retirees in the U.S. — that is, the rise in the retired population above pre-pandemic trends — has remained unchanged throughout 2022, at roughly 1.4 million.4 If the unretirement rate continues to climb and more retirees keep returning to work, this situation may change. Yet it is too early to tell whether unretirement will return the U.S. retired population to the level we would expect given pre-pandemic trends.

Figure 4: A rising share of older adults are leaving retirement and rejoining the labor force

Create a Federal Older Workers Bureau
As older workers make up an increasingly large portion of the U.S. labor market — those 65 and over comprise the fastest-growing age group in today’s labor market — it is long past time for an Older Workers Bureau (OWB). The OWB would hear from older workers and their employers, investigate their needs, coordinate the vast resources of the U.S. government, and modernize age discrimination laws and older worker training. An effective OWB would fulfill three functions: identify and analyze issues of concern for older workers; devise innovative policies to address these issues; and engage in outreach and education.

Strengthen Workers' Bargaining Power
One of the most effective ways to improve older workers’ pay, conditions, and retirement options is to expand unions. Across the board, unionization substantially improves workers’ access to, coverage in, and use of healthcare plans. Greater access to higher quality healthcare — a typical characteristic of unionized work — is especially important for older workers, for whom the prevention and treatment of chronic illnesses is critical. Union values and clout greatly improve workers’ safety and health in the workplace. What’s more, research shows that unionized employees earn far more than their non-unionized counterparts, on average, and provide important workplace protections.7

Make Work More Age-Friendly
Improving health and safety standards and providing paid sick-leave and time off will make the workplace better for all workers—including older workers.8

Throughout this report, we measure wage growth as the median growth in nominal hourly wages for select workers, computed as a six-month trailing average, using data from the monthly Current Population Survey (CPS), Outgoing Rotation Group.9 This follows the methodology outlined in the Wage Growth Tracker maintained by the Federal Reserve Bank of Atlanta.10 Note that this measure calculates median wage growth, not growth in the median wage. It is intended to capture the year-over-year wage growth of the typical worker within a group.

The wage growth calculation makes use of the longitudinal aspect of the CPS, which captures each respondent’s earnings information in two observations taken exactly one year apart. The sample excludes workers in agricultural occupations and the self-employed. It also excludes workers whose hourly wages are top-coded, fall below the federal minimum wage, or have been imputed by the Bureau of Labor Statistics.

To group workers into hourly wage terciles, we first use pooled CPS data, 2017 to 2019, to predict each respondent’s wages based on a regression of wages on industry, occupation, and industry-by-occupation. These predicted wages are used to group all workers into low-, middle-, and high-wage jobs. Following this method instead of using workers’ actual initial-year wages avoids mean-reversion effects.

4Excess retirement is calculated as follows. First, we calculate the share of the U.S. older population that is retired in the CPS. Then we estimate a linear time trend on the pre-pandemic period (2015-2019). The number of excess retirees is the difference between the actual retired share and the predicted counterfactual retired share, multiplied by the actual 55-and-older population.